Markus Anfang on contract extensions for Schmidt and Groß

Two contract extensions in two days! Christian Groß and Niklas Schmidt have both signed new contracts with Werder, with both players taking an unusual path to becoming regulars in the first team. Grosso made his Bundesliga debut at the age of 30, whilst Niklas Schmidt made his when no one else expected him to.

When Markus Anfang took the job as Werder head coach, one thing was clear: For Schmidt, who had been loaned out twice in recent times, first team minutes were going to be hard to come by. And yet, under the new coach, everyone was to get their chance to show what they could do in pre-season.

“Everyone had the same amount of time in the friendlies to prove themselves – whether that was Eren, Jojo, Maxi or Niklas. Niklas grasped the chance with both hands,” Anfang remembered. Schmidt applied himself fully in training sessions and friendly games and found a position that suited his game, so that in the end he earned himself a spot as a regular.

Groß the experienced head in a young team 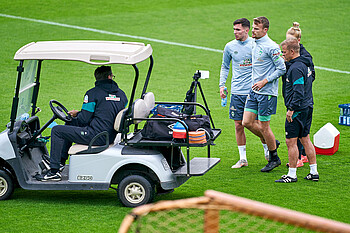 An important part of the jigsaw, despite injury (Photo: nordphoto).

The 23-year-old is not lacking in footballing quality. That has been clear for a long time, not only to Schmidt himself, but also to those around him. There were various opinions on the reasons why he could not show it, but in the end the “realisation that he had to make a change in his behaviour” played a critical role in the way everything worked out. “In the end, life is what you make it,” said Anfang.

The extension of Christian Groß’s contract is another indication that hard work pays off. “He always gives it his all, takes the lead and never gives in. That’s a character trait that sets him apart,” raved Anfang, who puts ‘Grosso’s’ leadership qualities down to those very attributes: “When a 32-year-old, who is perhaps not playing at the moment, throws himself into training, no 23-year-old can really start feeling down.”

Groß is a role model in terms of commitment and dedication - a player who has had a distinctive career up to this point. As with Schmidt, who is almost ten years younger, few people expected Groß to make the step up to the first team. “He has always been one of the most reliable players and he presents himself in such a professional manner now. He brings experience to the team and a vision of the bigger picture. That is a big help to our young team.”

Success only comes with hard work

18.01.2022 / First Team
Your web browser ist outdated.
The web browser you are using is no longer supported.
Please download one of these free and up to date browsers.
Why should I use an up to date web browser?