“It’s only about winning our remaining games”

An interview with Christian Groß

Christian Groß is a member of the Werder team council, has led SVW onto the pitch as captain and is a quiet but effective part of Werder’s defence. He’s been forced to watch the last two games of the run-in from the sidelines due to a Coronavirus infection, but he is about to make his return to team training. In an interview with WERDER.DE, Groß spoke about the influence of the team council, his experience of promotion races as well as his illness and recovery.

WERDER.DE: Grosso, we’re speaking to you the day after the home fixture against Kiel. How are you doing?

Christian Groß: “Your mood is certainly affected when you have to watch a match like that from the sidelines. But we need to carry on and keep our energies high for the season run-in. The game is over now, we need to accept that and do better in the last two matches.”

WERDER.DE: You’re part of the team council. What sort of a role do you take on in important weeks such as these? Is it significant that half of the council is unavailable to play right now?

Christian Groß: “You could tell at the start of the season that something was missing, and that was a time when a lot of the team council were out, too. With that comes a loss of experience, especially in the long-term. It’s not just on the pitch, but in the dressing room too. Yes, we’re still there, but it’s a lot different when you’re wearing the shirt and can have a more active impact. For these reasons, it’s important that the team council are all there in some capacity, but ideally that they’re fit and able to play also.”

WERDER.DE: Yourself, Ömer and Milos were all watching on from a distance on Friday against Kiel. Did you go into the changing room and speak with the team?

Christian Groß: “Of course, we’re in the changing room before games like this, but it’s difficult to fulfil your role as a leading player in these conditions. Every player’s got their own routine both during pre-match and at half-time, so you don’t want to disturb anybody. You can obviously give out one or two bits of advice, but you want to try and leave the lads in peace. As I said, it’s different when you’re wearing the shirt yourself and are actively involved. You also get a more direct and more intensive insight as to what’s happening on the pitch and can describe what’s going on better than you can when watching from the stands.”

WERDER.DE: And what was more difficult for you? Missing the Schalke game or the Kiel game?

Christian Groß: “Not being there in general was most difficult. Of course, the Schalke win was a fantastic day, but every match is important and it’s extremely tough every time you miss a match, particularly at this time.”

"In terms of communication, I prefer to focus on the facts and am generally quiet" 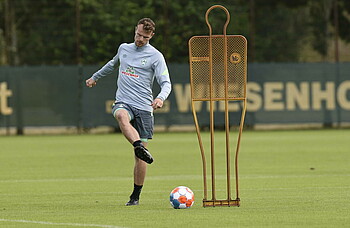 'Grosso' has returned to training this week following an illness. (Photo: WERDER.DE)

WERDER.DE: From the outside, you’re seen as a very quiet person. Is that the case in the changing room, too? Or do you sometimes get loud in such a situation?

Christian Groß: “In terms of communication, I prefer to focus on the facts and am generally quiet, but this isn’t always the case. I can be loud in a match or during training, I also have that ability. It doesn’t happen too often, but it can definitely happen. However, I don’t think that should happen too often. One of my strengths is being able to see things objectively and to recognise and react to them promptly.”

WERDER.DE: You have not had a ‘normal’ career path in general. Would you say that’s given you a different view of football, or perhaps has meant you can give the rest of the team perspectives that others might not have had?

Christian Groß: “Yes, for sure. I see some things differently because I learned about them in a different way. The lower leagues are completely different to professional football, no matter if you look at the infrastructure, the training camps or any other thing about the matches. I think it’s an advantage for me to have experienced a wider variety of things. I can help the players get used to certain things – I might say ‘Hey, lads, it’s never over until it’s over, things can always change. Nobody ever constantly keeps improving: every career has highs and lows.’ I think my experience helps me a lot in that respect.”

WERDER.DE: Are there also things which perhaps affect you in a different way, because you did not start your journey to professional football as a child?

Christian Groß: “No, I don’t think so. I think I’m a bit more relaxed and calm because of it. I think someone who has been through the whole journey from a young age reacts differently to things in general, because they’ve had a completely different set of experiences. I came into it a lot later, and didn’t know a lot of things, like the scale of our support. I’m very relaxed about that kind of thing.”

WERDER.DE: Could you describe how you share your experiences with your younger teammates?

Christian Groß: “I always try to give hints and tips when they need them – that’s one of my main roles as one of the senior players. I’m also the oldest player here though, so it’s my job to cheer players up and support them. Things like that come about easily in a healthy squad like ours. Even when everyone’s in a good mood, like after the Schalke game, I look to talk to the younger lads and celebrate with them.”

WERDER.DE: Playing for a big traditional club like Werder Bremen means there is also a large, loud and opinionated set of fans behind you to spur you on. What do you think of the fans – are they always motivation for you, or sometimes a source of pressure?

Christian Groß: “It’s pure motivation for me, especially for home games but when we go away as well. Even looking back on this season, with things like the celebrations after derby win against HSV, or the win at Schalke, or even the welcome they gave to the team bus on Friday – these are all special, special things which not every club can be proud of having. That gives every footballer a spring in their step. The fans and the emotions belong to football; they are what makes football special for me.”

WERDER.DE: You were able to experience a promotion race when you played for VfL Osnabrück. What experiences were you able to take away from that time?

Christian Groß: “No matter what league it’s in, a promotion is a promotion. From that time, I learned that a season is extremely long and you have to keep performing at a consistently high level and scoring points to see it through. It’s a marathon, not a sprint. We ran out of steam a bit in Osnabrück, especially us at the back, but you have to play consistently throughout the season.”

WERDER.DE: One final question: What would it mean for you personally to be back in the Bundesliga?

Christian Groß: “I’d rather answer that question in two weeks. Now, it’s only about winning our remaining games, and I hope we can achieve our goal.”