“I always set myself short-term goals”

Part 1 of the Anthony Jung interview

When defender Anthony Jung joined Werder Bremen from Danish champions Bröndby in the summer, it was considered somewhat of a coup for SVW. The 30-year-old spoke to WERDER.de about his professional career, his time in Denmark and his relationship with his Spanish father.

Tony, not that many people could understand your decision to leave Bröndby…

Anthony Jung: “It felt like the right time for me to end that chapter of my career after four years and to try something new. Winning the league was the perfect way to finish too. It became clear to me that it would be difficult to repeat something like that or even top that title win.”

What’s surprised you so far about Werder?

Anthony Jung: “I obviously knew that I was coming to a big club. However, I was really impressed from my first day here. The stadium is really stunning. We also have lots more things available to us, like more space in the physio room and other areas near the changing rooms. Everything’s bigger and better than what I’ve previously experienced at other clubs. I’m really happy that I made the decision to come to Werder.”

You were born in Spain and spent the first three years of your life there. What memories do you have of this time?

Anthony Jung: “I actually don’t have any because I was so young when my parents split up and my mother went back to Germany with me. We’ve got a few photos from back then, which give me an idea of what things were like in Spain. I can remember a picture of me in a waterpark in Benidorm, where I’m staring at the camera with a serious look on my face.”

I had a really nice childhood.

What’s the relationship like between you and your father back in Spain?

Anthony Jung: “When I was around eight or nine, he came to Germany for a few days. After that though, we weren’t in contact for a long time until I invited him to my wedding in summer 2018. Since then, we’ve kept in touch regularly. I hope that he can visit Bremen at the start of next year to meet his grandson for the first time.”

You grew up without your father in Wiesbaden. How was your childhood?

Anthony Jung: “I had a really nice childhood and it was nice and normal. My mother is a really strong woman and I’m thankful for the childhood she allowed me to have. She signed me up to a football team when I was six. Prior to that, I had played a lot of football on the street. My grandfather in particular, who played too, followed me on my footballing journey. He filmed my games and helped to drive me on as a young player. I have lots of good memories from my childhood.”

You joined Eintracht Frankfurt aged 13. Did you know at that point that you wanted to become a professional footballer?

Anthony Jung: “I had already noticed before I moved to Eintracht that I wasn’t bad in comparison to other people in my age group. Then I joined the best club in the state of Hessen and knew that things were getting serious. I had the chance to make it right to the top if I impressed in their academy. Overall though, I didn’t think too much about it, I just played football and looked to play to my best, as well as combine my schoolwork with football as well as I could.”

You didn’t manage to make it to the first team at Eintracht. Why was that?

Anthony Jung: “I don’t think I was at the required level back then. My final year in the academy was difficult because I was suffering from glandular fever and couldn’t really perform how I’d like to. There was then a massive rebuild in the reserve team and I ended up there. The coach said to me: “If players drop down from the first team, we’ll have loads of central midfielders. You’ll have a better chance of playing at left-back.” I had played in central midfield up until then, but it didn’t matter to me where I played.”

Anthony Jung: “When Christoph Daum was coach of the Bundesliga team in 2011, he watched a reserves game at the start of his tenure with his assistant coach. I played at centre-back on that occasion. I was then allowed to train with the first team the day after and really got a taste of what professional football was like. Working with Christoph Daum as a young player was a really great experience and was quite surreal for me back then.”

You then joined FSV Frankfurt in the second division in 2012, before moving to MSV Duisburg, another Bundesliga 2 side, a year later. That didn’t last long though…

Anthony Jung: “That was a really strange experience. Duisburg had problems securing their licence for the second division. They said ‘we’ll get it, we’re 99% sure’. However, after a week of pre-season, the decision was made that the club would be relegated to the third tier and my contract was therefore not valid. Thankfully, I got a move to RB Leipzig fairly quickly. It may have only been in the third division, but they outlined some promising plans to me – they knew where they wanted to be. The conversations with Ralf Rangnick also really helped to convince me. I wanted the chance to play. Promotion to the second division was the club’s aim and we achieved it too that season.”

“He’s young, quick and has an exact plan for his career” – that was the headline of a Leipzig newspaper back then about you. Was that true?

Anthony Jung: “Maybe they meant that my aims matched those of the club. Personally, I never planned many years ahead for my career. I simply worked hard wherever I was and tried to help my club reach their targets.”

You moved to FC Ingolstadt aged 25 to play in the Bundesliga for the first time in your career.

Anthony Jung: “Playing in the top flight was always my goal, but I always had patience. I always set myself short-term goals, tried to improve all the time and went my own way. Playing in the Bundesliga wasn’t the be-all and end-all for me.” 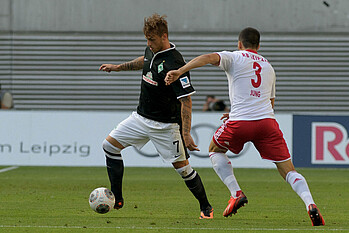 Anthony Jung faced Werder in a friendly with RB Leipzig back in 2013 (Photo: nordphoto).

You were on loan at Ingolstadt from RB Leipzig…

Anthony Jung: “Looking back on the conversation I had then, I would still choose to go to Ingolstadt. I had played 23 times for Leipzig in the second division, but most of those appearances were from off the bench. We then managed to get promoted. In order to play more, the move to another Bundesliga team, in this case Ingolstadt, made perfect sense to me. Unfortunately, this plan didn’t work out too well. I was relegated with Ingolstadt.”

Why did you choose to move to Denmark after that season at Ingolstadt?

Anthony Jung: “Firstly, I only had limited options in Germany. The other reason was that Alexander Zorniger, who I knew from my time at Leipzig, was the person that got in touch from Bröndby. He rang me up, however initially Denmark wasn’t something I was prepared to think about and I decided against going there. Relatively late on in the transfer window though, I changed my mind, mainly because I knew I would be playing under a coach that knows me and trusts me.”

Anthony Jung: “It’s pretty physical. The referees let a lot go, a bit like in the Premier League. The top of the league has a lot of quality, though it falls away further down the table. Football is important in Denmark. Bröndby IF is a great club with an amazing fan culture. The people live for football there. The derbies against FC Copenhagen were always incredible and great fun to play in.”

The second part of our interview with Anthony Jung will see him reflect on his first few months at Werder, his expectations upon arriving and his love for dogs.