Fabio Chiarodia is living the dream

It’s a significant moment in Fabio Chiarodia’s career as the Bremen defensive talent has signed a long-term professional contract at SVW. “I’m incredibly happy and proud to be extending my contract with the team whose academy I’ve been at for eight years. I cannot put into words just how happy I am,” commented the 16-year-old in an interview with WERDER.DE.

Born in raised in Oldenburg, a town on the outskirts of Bremen, his family only ever supported one team. “My uncle has always been a Werder fan and they’re the biggest club that are close to Oldenburg, so of course I’m also a Werder fan,” said Chiarodia. “We frequently went to the games when I was younger and hadn’t yet joined the youth team, and that was always a brilliant experience. When the club said they wanted to sign me, I still wasn’t entirely sure what was going on, I was just lying on the sofa. My mother explained it all to me and then I began to cry tears of joy.”

No tears were shed by the 16-year-old centre back on Thursday, however, although he may have been pinching himself. “I still can’t quite fathom that I’ve been training with the first team and have already played in friendly matches against Oberneuland and Feyenoord,” added Chiarodia, before going on to say: “It’s all been like a dream.” Chiarodia has set himself small goals so he can eventually achieve his main ambitions. “It makes me incredibly proud to have already ticked off my first goal by signing my first professional contract. I will keep working hard so that I can achieve my other goals.”

Toprak as a mentor

When he arrived at the WERDER academy at just nine years of age, his current teammate Ömer Toprak was already an established player in the Bundesliga, and now they are both playing in the same team. Fabio Chiarodia doesn’t just benefit from the support of the 32-year-old veteran on the pitch. “In the first training sessions of my first few weeks, I didn’t dare say anything, not even once. Whenever anyone asked me something, I would completely freeze. I was so very nervous and would like to take this time to thank Ömer in particular: he helped me so much to settle in. Thank you!”

But other first-team members also supported the Italian from Oldenburg. “I can still remember the first time I went into the dressing room and was introduced. Someone asked me what country I was from, and I answered ‘Italy’, which prompted four or five of the lads to start singing an Italian song, because we had just won the EUROs, and that helped me feel welcome from the start.”

Anfang: “Fabio is already very well developed for his age” 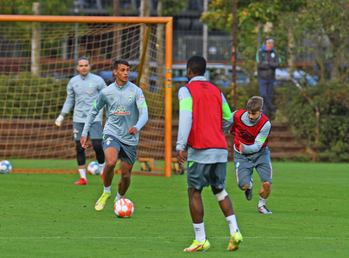 Fabio Chiarodia has been training with the first team since the start of the season (photo: WERDER.DE).

Markus Anfang knows what he’s got with Chiarodia: “Fabio is already very well developed for his age. He’s a mature, left-footed centre-back who’s quick, good in duels  and has already shown us in many training sessions that he can get up to the speed of our games relatively quickly,” said the head coach, mentioning that the youngster has learned quickly. “That said, he’s a young player and he still needs a bit of time. We’ll be patient with him. He’s a big talent and we’re delighted to be able to keep him here.”

Anfang is convinced that Chiarodia is on the right path. “I believe that at Werder we’re in a situation where the young players in particular can get the opportunity to show and establish themselves. I think it’s already a good thing for him to be working more closely with the pros whilst still getting match time in the junior teams. The conditions for him here are perfect.”

The fact that a talent such as Chiarodia is being scouted by lots of prestigious clubs is no surprise. The decision on which club Fabio would play for was one taken for his entire family. “My family means everything to me – they’re the most important thing in my whole life. Yes, you listen to the wide range of offers from so many different clubs, but like I said, my family is my world so that played a big part in my decision to stay here.”

It wasn’t just his family who helped make the decision easier – SVW itself was a part of the 16-year-old’s choice to stay. “Werder’s a special club! It’s the way the whole city of Bremen gets excited along with all the fans in the stadium, and I see it when I’m there. I get goosebumps at every game when I hear the fans singing and the players’ names being called out. When I imagine that I could be one of those players, I just think ‘wow’ to myself,” said Chiarodia. “But not only that. The surroundings, the city, how the club works – I just enjoy everything here so much.”

It’s not yet clear how Chiarodia’s professional career will play out, but there are definitely some idols off which he bases himself. “I’ve got a few role models that I look at a lot. A lot of them aren’t playing football anymore, like Maldini or Cannavaro for example. Of players currently playing, Sergio Ramos is my idol. I can learn a lot from his mentality and how he plays football. I also enjoy watching Paul Pogba – he makes playing look so fun.”

No matter what the future brings, Bremen are glad to have been able to secure the services of such a talented local player for the long-term.