“We've got some busy weeks coming up”

The Werder players are back at the wohninvest WESERSTADION ahead of the new season. They completed performance tests on Sunday and Clemens Fritz, head of professional football and scouting, spoke to the media for the first time before the new campaign. He spoke of some busy weeks ahead, but stressed how excited the team is for the club’s return to the Bundesliga.

Aside from Romano Schmid, Marco Friedl, Milos Veljkovic and Niklas Stark (given a longer summer break after international duty or after playing the relegation play-off), plus Manuel Mbom, who is completing rehabilitation training after his Achilles tendon injury, all the players were back in Bremen on Sunday for performance tests. All players also tested negative for Covid. Performance tests will continue until Tuesday, before the first training session out on the pitch on Wednesday. New signing Dikeni Salifou was at the stadium on Sunday. “We’re pleased that we were able to complete the signing of Dikeni. He’s a really promising young player. He will obviously need time to adapt, but he’s an open-minded guy. We have lots of faith in him,” said Fritz on the 19-year-old.

“Working hard to strengthen the team” 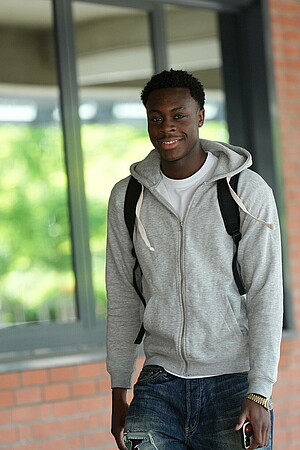 “The anticipation ahead of the season is extremely high. I’m happy that the lads are all back and fit for start of the season. We have some busy weeks ahead of us, but we’re ready to take them on and we’re looking forward to it,” said Clemens Fritz. “We also know that we will announce a few more transfers still, but it’s difficult to predict when that may happen. We need to strengthen the team and are working hard to do so.” The club have been involved in negotiations over the last weeks already: “It’s no secret that we were very interested in Daniel-Kofi Kyereh. However, that topic has been closed now because Kofi has decided to go in a different direction. Of course we would have liked to get that done, but these kinds of things are normal during a transfer window.”

Werder’s head of professional football and scouting listed the club’s priorities for this transfer window as bringing in reinforcements for the wings, as well as in midfield and in attack. “We would like to make some moves in those areas, but need to see what’s realistically possible,” Fritz said. “We obviously have to stick to our budget.” He added that Werder aren’t in a situation where they would need to sell players in order to bring in new ones. “However, it’s also important that we make the right choice and do what makes sense for us. It has to be the right fit, both on a personal and financial level.”

Clemens Fritz says that Mitchell Weiser and Marco Friedl’s futures are also being discussed and that they’ll have to wait a few days when it comes to Weiser. “Mitch knows that we want to keep him here and so do Leverkusen. We’re in talks with them but there are competitors.” Meanwhile, Fritz says Marco Friedl will enjoy his holiday after international duty. “Marco will join up with us on 28th June and then we’ll see how things are. For now, he needs to recover and switch off a little.”

After that, SVW will have their first friendlies of pre-season. In addition to the fixtures already scheduled against VfB Oldenburg and Karlsruher SC, three or four more are planned, with one due to take place at the training camp in Zillertal when squad will be at full strength again with the latest returning players.

“My goal is to keep proving myself every day”

“We need to get back into our routines”

25.06.2022 / Match Report
Your web browser ist outdated.
The web browser you are using is no longer supported.
Please download one of these free and up to date browsers.
Why should I use an up to date web browser?