“There are no differences”

Frank Baumann speaks to the media

Werder began preparations for Sunday’s away game in Sandhausen this Wednesday. Sporting director Frank Baumann took some time to update us on Niclas Füllkrug and other news around the club in recent days.

…Niclas Füllkrug’s suspension: "Niclas was very frustrated after the game, which led to a vocal argument with Clemens Fritz in the changing room afterwards. His behaviour crossed a line which we do not tolerate as a club. Even though Niclas apologised directly to Clemens, the players and the coaches on the Monday, we went through with the disciplinary action, because we did not want to leave things the way they were."

…the next steps with Niclas Füllkrug: "We will try to speak to him on Thursday. The important thing is that Niclas accepts that his behaviour was out of line and that we see a reaction from him. If that is the case, there is no reason for us not to carry on with him in the same way, and he would then be an option for the weekend’s game in Sandhausen." 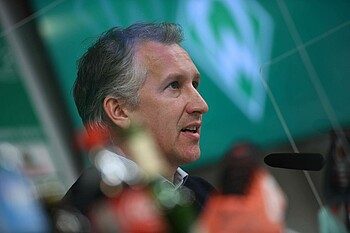 …potential friction ahead of the Sandhausen game: "I don’t think the incident will distract us. Obviously it’s a talking point within the team and surrounding the club, but after today our focus will be on the game in Sandhausen. We want to prepare well and address several things at training that we didn’t do well in Darmstadt. There’s a lot to put right after our last game."

…the reporting on the sporting situation across the past few days: “Several stories that came from Markus Anfang’s conversation with the media after the Darmstadt game really surprised me. The first one was the one regarding Niclas Füllkrug, who was apparently singled out for criticism by Anfang, plus there was an article which contained false claims that a change of coach should take place. As coach, Markus Anfang was well within his right to criticise the poor performance in Darmstadt. To claim that the coach was distancing himself from the team on the back of that is simply wrong. He’s said often enough that we’re all in this together. The claims that there are differences between Markus Anfang and the staff are also false.”

…sticking to one system: “The idea that Markus Anfang just sticks to one system is also not true. He perhaps prefers one system, but he’s flexible enough to switch things up. For example, he showed that during his time in Cologne when he played with two strikers. We’ve also used different setups so far, including a back-three and attackers playing more on the inside as a second striker. People are going to say what they like when it comes to these claims or coming up with things like players are constantly being played out of position – I’ve got no time for it. I will gladly be criticised for it, but I’d like to ask people to let Markus Anfang and his team work in peace.”

The orders have been clearly given

30.11.2021 / First Team
Your web browser ist outdated.
The web browser you are using is no longer supported.
Please download one of these free and up to date browsers.
Why should I use an up to date web browser?