Preview of the friendly against FC St. Pauli

Following the home victory against Arminia Bielefeld last weekend, most of the Werder squad will have time to catch their breath next weekend. But before Florian Kohfeldt’s team can enjoy a short mid-season break, they will take on FC St. Pauli in a friendly on Wednesday 7th October (17:00 CEST) in Bremen. The match will take place on Pitch 11 at Osterdeich behind closed doors due to the ongoing effects of the coronavirus pandemic. However, the friendly will be available to stream live and for free on Werder’s YouTube channel.

Squad news: Werder’s head coach is expected to use the friendly to let players who have not featured regularly so far this season get some minutes under their belts. Milot Rashica, Niclas Füllkrug, Davie Selke and Stefanos Kapino will sit out the game as planned. Meanwhile Ludwig Augustinsson, Marco Friedl, Yuya Osako, Nick Woltemade and Milos Veljkovic are on international duty and are therefore unavailable.

Keeping up the consistency 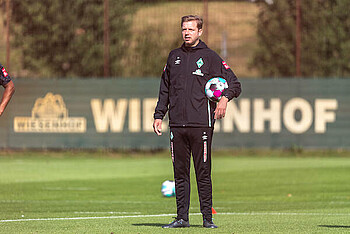 Florian Kohfeldt will make a number of changes for the friendly (photo: nordphoto).

The opponents: The encounter is the second between SVW and FC St. Pauli within the last two months. In the previous meeting between the sides during pre-season at the end of August, Milot Rashica secured a 1-0 victory for the Green-Whites. Both teams are now underway in their respective campaigns. FC St. Pauli have started steadily in the Bundesliga 2 and are currently midtable, having won 4 points from their first three matches. Following their opening day 1-0 defeat to Sandhausen, coach Timo Schultz’s side beat last season’s relegation play-off opponents Heidenheim 4-2. The Hamburg side’s most recent result was a 2-2 draw away at VfL Bochum.

Florian Kohfeldt on the match: Two main things are important for the Werder head coach in the friendly. “What’s important is that we maintain our rhythm, and that we give certain players a game that may not have otherwise had the opportunity to play 90 minutes.”