The DFB-Pokal is all that counts this week. RB Leipzig are the visitors to the wohninvest WESERSTADION from 20:30 CEST on Friday in the first ever cup clash between the sides. Just one win separates the Green-Whites from an eleventh appearance in the DFB-Pokal final. “This is already like a final for us and we will be full of energy and desire. Our focus is only on this match, no matter what our current situation in the league is,” said Florian Kohfeldt at his pre-match press conference.

Team news: There is some good news to report regarding the players who have been sidelined lately, with Milos Veljkovic, Leonardo Bittencourt and Ömer Toprak expected to return to the squad. Niclas Füllkrug might not have completed the full training workload this week as a precaution, but he is an option on Friday. Only Marco Friedl is definitely sidelined for the semi-final with a bruised pelvis. 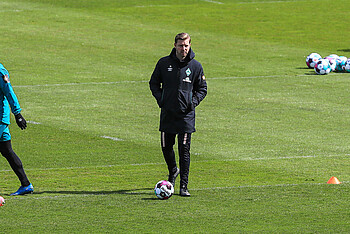 Florian Kohfeldt has delivered fighting words ahead of the cup semi (photo: nordphoto).

The coach’s pre-match thoughts: It hasn’t been an easy week for Florian Kohfeldt and his side by any means, but there is still a “positive sense of excitement” in the Werder camp. The focus for now is solely on reaching the DFB-Pokal final: “This isn’t a Bundesliga game, but a cup semi-final. We have to go into the game with a fresh mindset. We want the lads to play to their strengths,” said the 38-year-old. There’s no denying the quality of the visitors from Leipzig, with SVW having already failed to take a point off them in the league this season. “We know what to expect, so every single player will have to give their best on the pitch. With commitment and the right energy, we hope to achieve something extraordinary in this match.”

The last meeting: It was only three weeks ago, on 10th April, that the sides last faced off on matchday 28 in the Bundesliga. SVW were beaten 4-1 in that home meeting, with Dani Olmo and an Alexander Sortloth brace putting RB Leipzig three up at the break. The Green-Whites improved in the second half and Milot Rashica’s penalty reduced the deficit, but an immediate response from Marcel Sabitzer ended any hopes of a comeback. 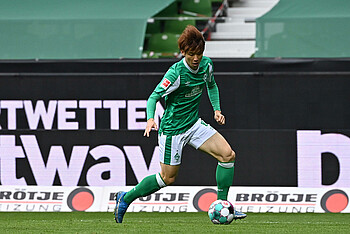 The previous round: Werder managed to see off SSV Jahn Regensburg in the previous round, with Yuya Osako’s goal from a sensational Marco Friedl pass enough to secure a 1-0 win. Leipzig will be Bremen’s first top-flight opponents of this season’s cup run, while RBL themselves had to find their way past fellow Bundesliga outfit VfL Wolfsburg in the last round. Their 2-0 win included a goal from Yussuf Poulsen, the competition’s top scorer this season with five goals.

Werder’s cup history: SVW have played 240 DFB-Pokal fixtures to date, exactly ten times as many as opponents RB Leipzig (24). This will also be Werder’s 23rd semi-final, with only FC Bayern involved in more (31). Leipzig, meanwhile, have reached this stage for just the second time in their history. Bremen have come out on top in 40 of their last 41 home ties in the cup, scoring at least one goal in every single one of those games.

“Not many goals, but important ones!”

A battle of nerves against Augsburg

Hope that Friedl, Toprak and Mbom could feature

13.05.2021 / First Team
Your web browser ist outdated.
The web browser you are using is no longer supported.
Please download one of these free and up to date browsers.
Why should I use an up to date web browser?