“Courage and aggression” against Schalke

Preview of the Schalke game

“We completely messed up the first game.” Florian Kohfeldt didn’t beat around the bush when giving his thoughts on the start of the 2020/21 season. There was a strong sense of disappointment following the opening day defeat to Hertha BSC, but now is the time to bounce back. SV Werder’s head coach doesn’t want to hear any excuses. Werder travel to the VELTINS-Arena on Saturday and need to show “a different side of themselves” against FC Schalke. Kohfeldt is looking for a Werder team that “takes hold of the game and are nasty to play against.”

Squad news: “They’re fully fit and available for selection” are words that every Werder fan will be glad to hear from Kohfeldt when the coach discusses player availability. This phrase applies to most of the squad, as Werder currently have “a lot of players who are match fit”. However, not included amongst these are Milot Rashica, Ömer Toprak and Kevin Möhwald. The trio are well on the way to recovering from their respective injuries, but are not yet ready for action in Gelsenkirchen.

Coming into the game with the right mindset 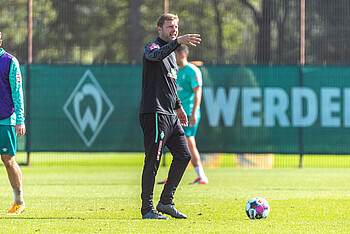 Kohfeldt on the match: “They’ll be really up for the game,” predicted Florian Kohfeldt of the Schalke players. The Royal Blues got the new season off to a less than ideal start last Friday away in Munich. “They had the worst possible start to their season,” said Kohfeldt as he discussed the 8-0 defeat that Schalke were subjected to in Bavaria. But the 37-year-old is not expecting to encounter a team lacking confidence at the weekend. “I’m not expecting them to be rattled after the defeat; they’re a team of experienced professionals after all. The quality that they have on the pitch is impressive. It’s a very difficult task that awaits us.” However, Werder’s coach didn’t want to dwell on the opposition, saying “we have to play our own football!” Alongside wanting Werder to “take control and play nasty”, Kohfeldt also want to see more “courage and aggression”: “This all-or-nothing attitude needs to be behind every challenge in every game - it’s vital for us.”

The previous encounter: The last match between SVW and S04 was just after the restart following the coronavirus break. when Werder came away winners on the 30th May. Leonardo Bittencourt curled in the only goal of the game from outside the box, earning the Green-Whites three vital points in the battle for Bundesliga survival. A strong defensive performance ensured Werder came away with the victory in Gelsenkirchen. The match four months ago was played without fans and this could also be the case on Saturday, with the authorities set to decide whether spectators will be permitted on Friday. 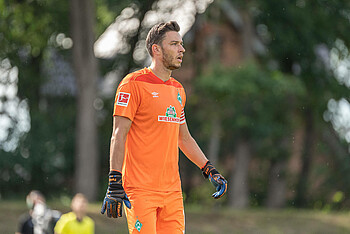 Jiri Pavlenka will be looking for his first clean sheet of the campaign (photo: nordphoto).

Strong previous record: Florian Kohfeldt has beaten Schalke five times, more than any other club. In total, the two Bundesliga sides have faced each other on 102 occasions in the league. Werder have come away victors in 44 of these games, six more times than the Royal Blues. The aim on Saturday is extending this record.
Schalke’s poor form: FC Schalke have not won in the Bundesliga since January 2020. Following their last win, a 2-0 victory against Borussia Mönchengladbach, the Royal Blues have drawn six and lost eleven games, going winless for 17 matches.

The referee: Due to the current situation, the German Football Association (DFB) will not announce the appointment of the referee team until the match day, after a negative corona test.

15.10.2020 / First Team
Your web browser ist outdated.
The web browser you are using is no longer supported.
Please download one of these free and up to date browsers.
Why should I use an up to date web browser?