It’s crunch time in the Bundesliga. On Saturday at 15:30 CEST, SV Werder Bremen have their first of three remaining chances to pick up vital points in the fight for survival against Bayer 04 Leverkusen. Florian Kohfeldt sees it as the players’ duty to show the "same energy, the same fire in their bellies that I’ve seen at training all week. The team needs to show unconditional courage and fight until the end," he said at Thursday’s press conference.  ​​​​​​

Squad update: Milot Rashica trained with the team again this week and is an opton for Saturday’s game. A decision on Marco Friedl and Manuel Mbom’s involvement will be taken at short notice. Bad news for Ömer Toprak, on the other hand: The centre-back suffered a setback in his recovery training and will likely be out for the rest of the season. All other players, aside from those with long-term injuries, are available to face Leverkusen. 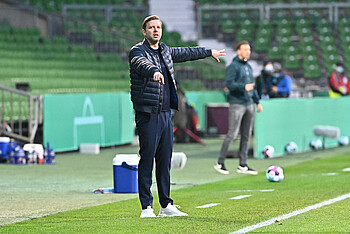 Florian Kohfeldt is relying on his team's mentality (nordphoto).

The head coach on the next game: Another week with an opponent from the top half of the table. Leverkusen are currently sixth in the league with 50 points from 31 games. After a ruthless start to the season up until December, Leverkusen’s form took a turn for the worse, but since the appointment of Hannes Wolf as head coach, they have regained some stability. "Leverkusen are a really strong team with a lot of pace on the wings. In the middle they have players who can move the ball around well and at the back they are solid," said Florian Kohfeldt, for whom, and for the team, playing nice football is not longer important at this stage of the season. The approach against Leverkusen is simple: "We didn’t play particularly nice football against Leipzig either – tactics will take a back seat on Saturday as well. Our focus will be on our mentality and our fighting spirit."

Last encounter: Werder were able to take a point home from Leverkusen when the teams met earlier this season. SVW put up a good fight in the 1-1 draw, taking the lead from a set-piece. Ömer Toprak was unmarked from an Augustinsson free-kick and he tapped home from close range (52’). Patrik Schick levelled the scores for the hosts after 70 minutes.

"Not an ideal opponent, but we can’t be worrying about that!" 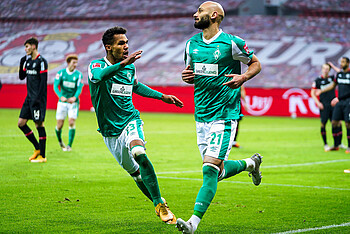 Ömer Toprak, goalscorer last time out vs. Leverkusen, will miss out this weekend due to injury (nordphoto).

Leverkusen's form: Bayer 04 Leverkusen have won three of their last five league games (one draw, one defeat). All 23 of their goals this calendar year have come from open play. Something to look out for from a Werder point of view, as is Leon Bailey, who has been directly involved in an impressive five of his team’s last six Bundesliga goals (three goals, two assists).

Werder’s situation: Defeat to Union Berlin last time out made it seven consecutive defeats in the Bundesliga for SVW – a continued and an unwelcome club record. Leverkusen’s weakness away from home gives courage, however: The Werkself have won only one of their last eight Bundesliga games on the road (two draws, five defeats). They have also failed to score in all of their last three away games.

12.06.2021 / First Team
Your web browser ist outdated.
The web browser you are using is no longer supported.
Please download one of these free and up to date browsers.
Why should I use an up to date web browser?