It’s been a busy week at SV Werder. After other Bundesliga clubs’ players have been infected with the coronavirus, a Werder player also tested positive this week. Despite this challenging situation, Florian Kohfeldt and his side will be hoping to pick up the points against TSG Hoffenheim on Sunday, 25th October 2020 (18:00 CEST). “It’s important that we flip the switch again,” said sporting director Frank Baumann on Friday. No fans will attend the game in the wohninvest WESERSTADION, just like the last home game against Arminia Bielefeld due to the high infections rate in Bremen.

The squad: Felix Agu is in quarantine due to his coronavirus infection. His roommate Tahith Chong, who was also in quarantine, has been able to leave early and is available to face Hoffenheim. Ludwig Augustinsson will miss out due to a thigh injury and is also likely to be out for the trip to Frankfurt next week. “We have a few decisions to make”, said Florian Kohfeldt, who is without both his left backs. Patrick Erras (thigh) and Davie Selke (groin) are also unavailable for tomorrow’s game.

The focus is back 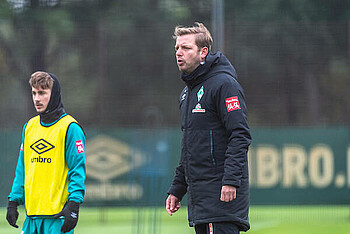 Kohfeldt wants a passionate display from his players on Sunday (Photo: nordphoto).

The head coach on the game: Florian Kohfeldt was able to confirm Frank Baumann’s view: “The team was fully focused in training yesterday. I’m expecting this to be the case today as well and I’m confident that we will concentrate fully on the game against Hoffenheim,” said the head coach at the pre-match press conference. Kohfeldt is also aware that a strong side will travel to Bremen: “It’s obviously an advantage for us that Kramaric is out. Nevertheless, Hoffenheim have other players with quality. I’m expecting a strong squad that will test us out with their pace.” Werder will be looking to gain control of the match as quickly as possible. “We need to play with passion from the off, get stuck in and get the ball forwards directly if in doubt,” said Kohfeldt. End the bad run: Hoffenheim did the double over Werder in 2019/20, which Kohfeldt’s side will be hoping to avenge this season. The overall head-to-head record is in Werder’s favour though, having only lost five times to Hoffenheim in 24 Bundesliga meetings (plus 10 wins and 9 draws). In the last six league games, however, Werder haven’t won any of the clashes, drawing four times and losing twice. Hopefully this bad run will come to an end this weekend.

Chance for Werder: After starting the season with back-to-back wins – including a 4-1 thumping of FC Bayern at home – Hoffenheim have lost their last two league games against Frankfurt and Dortmund. Nonetheless, Werder are still preparing for an extremely tough game, although Hoffenheim’s top goalscorer, Andrej Kramaric, is in quarantine due to a coronavirus infection. The Croatian international has scored six of his side’s eight league goals this season – a higher percentage of a team’s goals than any other player. SVW are currently one place ahead of Hoffenheim in seventh and are currently unbeaten in three league games.