Match preview ahead of Saturday’s return to Bundesliga action

After being plagued by injuries all last season, head coach Florian Kohfeldt can breathe a sigh of relief at having a full squad to choose from ahead of Saturday’s visit to Freiburg (17/10/2020, 15:30 CEST).

The squad: “The international break was good for all of us,” Florian Kohfeldt said about having all his players available for the weekend. It’s something that the Werder head coach has only rarely been able to experience. Although it’s unlikely that Ömer Toprak will be able to feature for the full 90 minutes, “He could be an option for the squad. The same goes for Kevin Möhwald,” said Kohfeldt. Following his return to team training this week, Milot Rashica could feature for 30 to 45 minutes, according to Kohfeldt, who added: “All our players who are here are an option for the game against Freiburg."

Having the right mindset 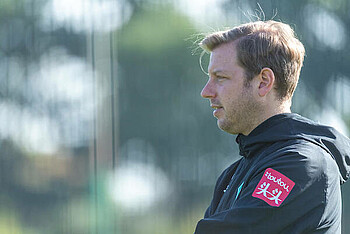 Florian Kohfeldt has a full squad to draw from this weekend (Photo: nordphoto).

The head coach on the game: Florian Kohfeldt is well aware that a win against Freiburg would mean a big step forward for his side, as they look to have a more stable season this term. However, Kohfeldt said it’s too early to be keeping close tabs on the table. “It’s good for us to not constantly be adding up the results. Instead, we need to continue to go into every game and give it our all in order to pick up wins in the Bundesliga,” he said. Kohfeldt drew positives from both games against Bielefeld and St. Pauli, and is now looking for his side to build on those. “It’s extremely important that we keep the same mentality we brought to our last two games,” he said. He also drew parallels between Freiburg and Bielefeld. “Freiburg are a compact side who play very direct attacking football. What singles them out is the way they quickly find their way into the final third, which poses a real challenge,” he said. Kohfeldt is looking for his team to cope better against such a style of play compared to how they fared in the second half against Bielefeld.

The most recent meeting: Werder fans will likely not have forgotten the last time their side faced off against Freiburg on 23rd May, with the squad fully in "all or nothing" mode. It was only Werder's second game following the restart and the team were feeling the pressure after a 4-1 defeat at home against Leverkusen. Leonardo Bittencourt's 19th minute strike was enough to secure a 1-0 win for Bremen as they picked up a crucial three points in the fight against the drop. Bittencourt has scored more Bundesliga goals against Freiburg than he has against any other side (7 goals). The Green-Whites will be looking to their midfield man to be the difference once again this weekend.

Building on the previous performances 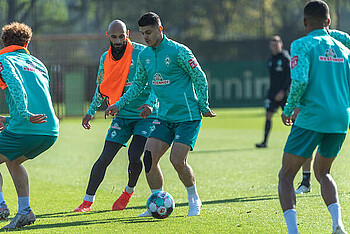 Milot Rashica and Ömer Toprak have both returned to team training (Photo: nordphoto).

Extending the positive record: Of the 40 Bundesliga meetings with Freiburg to date, Werder have won 23, drawn eight and lost nine and have a winning percentage of 57 per cent against SCF. Werder have only won a higher proportion of their games against Bielefeld (61%). Across all competitions, Freiburg have only won one of their last eight meetings with Werder (D3, L4).

Freiburg able to serve for surprise: It’s early days yet, and a win would see Freiburg (12th place, 4 points) surpass Werder (7th place, 6 points) in the standings. Saturday will determine whether or not Freiburg have been able to put their 4-0 humbling at the hands of Dortmund behind them. The defeat last matchday could just be a bump in the road, as Freiburg have started the season with strong results already with a 3-2 win against Stuttgart followed by a 1-1 draw against Wolfsburg.