“Being brave enough in the key moments”

Ömer Toprak could come up against some of his ex-teammates from Leverkusen on Saturday (photo: nordphoto).
preliminary report
Thursday, 07.01.2021 / 16:04

In the pre-match press conference, head coach Florian Kohfeldt made a point of noting that he expects his team to improve in a number of key areas, namely their tackling, aggression, and alertness. “My expectation of the team is for them to be brave enough in the key moments and that we try to reach our best in terms of performance,” Kohfeldt told the press at the conference on Thursday as he looked ahead to the Bundesliga clash against the ‘Werkself’ (09.01.2021, 15:30 CET).

The squad: Following injuries picked up in training to Christian Groß and Patrick Erras, SVW will be without two of his defensive midfielders for the foreseeable future. However, the Green-Whites have received a boost up front with the return of Davie Selke and Niclas Füllkrug last weekend. Milot Rashica returned to team training during the week but is not expected to be involved until the next home game against Augsburg. Niklas Moisander and Felix Agu, who both trained individually on Wednesday, are back in the squad for the match in Leverkusen.

Bravery with the ball 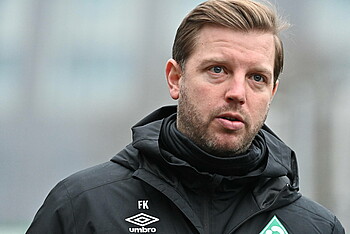 The head coach on the game: Bayer Leverkusen currently sit in third place in the Bundesliga table and their quality is no secret. “We’re expecting a very counter-attacking team with a lot of pace, individual quality, and good play in the middle of the park,” said Florian Kohfeldt. However, Werder’s coach also sees opportunity in the playing philosophy of counterpart Peter Bosz. “Their system is bit risky at times and leaves openings for opponents that you can take advantage of.” It’ll be important that Werder make the most of such openings if the Green-Whites want to take anything from the game. “We’ll need to play with a lot of bravery to make the most of our opportunities,” stated Kohfeldt.

The last meeting: On 18th May 2020, all eyes were on the Bundesliga for the restart after the coronavirus break. Werder welcomed Bayer Leverkusen to the wohninvest WESERSTADION as both teams got their first experience of playing in front of empty stands. The visitors took the lead before Theodor Gebre Selassie equalised in the 30th minute. The ‘Werkself’ netted again shortly after through Kai Havertz (33’) before inflicting a bitter 4-1 defeat on Kohfeldt’s team. Despite this setback, it shook the Werder players into life and they took three points in the following game against SC Freiburg. The first meeting last season was a fiery contest that ended 2-2 in Leverkusen, whetting the appetite for Saturday’s clash. 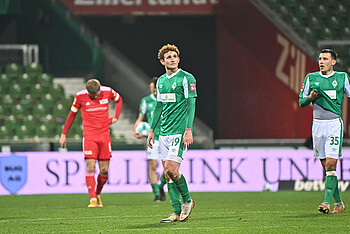 A true classic: A total of 80 Bundesliga matches between SV Werder Bremen and Bayer Leverkusen have been played. The Green-Whites are slightly ahead in the head-to-head record with 27 wins compared to Leverkusen’s 22, while 31 games have ended as a draw. Despite this, Werder have only managed one win in their last seven matches against the ‘Werkself’, drawing three and losing three. Kohfeldt’s team will be hoping to channel the 3-1 win from March 2019 at the BayArena on Saturday.

A rocky start to the New Year: Leverkusen remained unbeaten in their first twelve Bundesliga games of the season with eight wins and four draws, but most recently conceded their second successive league loss with a 2-1 defeat in Frankfurt. Meanwhile, SV Werder also had a less-than-ideal start as they fell to two first-half goals against Union Berlin. Both teams will be looking to bounce back from these results on Saturday.

“I flew under the radar a bit during my youth ca ...

01.03.2021 / First Team
Your web browser ist outdated.
The web browser you are using is no longer supported.
Please download one of these free and up to date browsers.
Why should I use an up to date web browser?