Views on the Leverkusen game

Following an uneventful first half at the BayArena, the second 45 minutes saw more action as Werder and Bayer 04 Leverkusen both scored to make it 1-1 and share the points. For Florian Kohfeldt’s team, it was a bounce back from the unfortunate start to the year. “Everyone put in that extra bit of effort for each other that was lacking last weekend,” summed up Kevin Möhwald after the game. 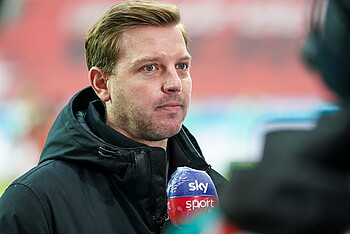 Florian Kohfeldt: “It's a well-deserved point. I felt that we had the better chances and Jiri Pavlenka was not called into action often. We played well apart from the goal we conceded, but that's what happens against a top team; you get punished for your mistakes. From my point of view, we were the better team though, and I'm satisfied overall with our performance and the result. In terms of what we should have done better, we should have defended counterattacks better and maybe marked more closely. It sounds a bit strange after we played so poorly last week, but we could have won today which is a bit annoying. We have to keep this sharpness up for the next games that are fast approaching.”

Kevin Möhwald: “Tactically, our plan worked perfectly even if it wasn't always easy on the eye. We allowed them very few chances but the only thing we struggled with was playing on the counterattack. But we knew that Leverkusen are a strong team and that we had to keep it compact and I thought that we did that. We’ll gladly take the point back to Bremen with us even if we would have liked to have won. A point off such a good team is fine as far as I’m concerned though.”

Ömer Toprak: “It was a very disciplined team performance today. I think we can definitely be satisfied with the way that we played, especially compared to last week. We didn't give Leverkusen, who are a strong team, many chances at all. Then we took the lead and of course you always want to take the three points when that happens. Overall though I'm happy that we put in a good performance and came away with a point.”

On Toprak’s goal against his former club: 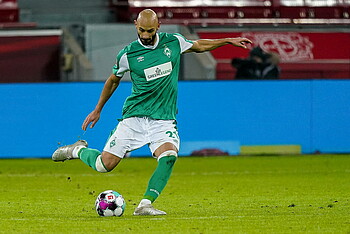 Ömer Toprak scored against his former club to make it 1-0 (photo: nordphoto).

Florian Kohfeldt: “We said at half time that this was a game that could go either way. We knew that we could create something from set pieces, and it worked out well in the end.”

Ömer Toprak: “It's the first time I've scored against a former club and it's a good feeling because I've been injured for such a long time. But I also know what I owe to the people here at Leverkusen so I kept my celebration low key. I'd told Ludde to whip it in low at the near post beforehand. Set pieces always offer the chance to take the lead - they are very difficult to defend against.”

On the goal conceded:

Florian Kohfeldt: “It's annoying because Alario has so much space. It's an unfortunate situation but it is a goal. After the third replay in slow motion, we did see that it was not a handball and therefore in fact a goal. So we can't complain.”

Kevin Möhwald: “The goal we conceded was unlucky. It's not nice to be out there while VAR takes so long to decide. At the end of the day it's either a handball or it’s not so you would hope that the decision would be reached a bit faster. But I think that they made the right decision in the end. We should have defended it better beforehand, then a situation like that wouldn't have come about.”

Ömer Toprak: “In the moment, it seemed to all of us that Alario had handled the ball. If you look at the replay, it looks like a handball from one angle but not from the other. It's just unfortunate the way that it bounced around in the box and then eventually went in. I don't think that Leverkusen had many other chances to score, which is a big positive for us as a team. We know that every point counts though, so we're going home with mixed feelings.”