Views on the 2-1 victory over Eintracht Frankfurt

When André Silva headed home the opener for Eintracht Frankfurt in the 9th minute, not many would have been predicting a home win for SV Werder. However, Florian Kohfeldt’s team displayed their desire and commitment in the second half and managed to turn the game around to take all three points at the wohninvest WESERSTADION. “We played the best team of 2021 and we beat them,” beamed Kevin Möhwald after the home victory. SVW’s head coach also had nothing but praise for his side’s performance: “I’m extremely impressed with what I saw tonight. We were at our best this evening.” 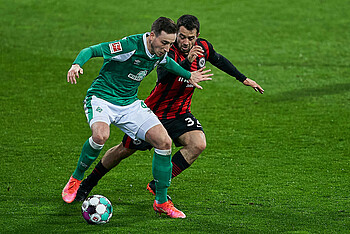 Kevin Möhwald: “We played the best team of 2021 and we beat them” (nordphoto).

Kevin Möhwald: “We played the best team of 2021 and we beat them. We are definitely pleased with our performance tonight. It's clear that a game against such a top side will always have lots of different phases. We had to work hard out of possession, but we did that well compared to the game against Hoffenheim. Then we managed to score with two quick counterattacks to take the win!”

Josh Sargent: “Everyone knows how important these three points are for us. I think that we can all sleep well tonight. We knew beforehand that Frankfurt would be very secure on the ball, so we had to take advantage of transitions. We’re delighted with the three points.”

Romano Schmid: “It was very important for us to make up for last weekend’s defeat. That's why I'm so happy! It was a great performance from the whole team. Even though we weren’t at our best for the full 90 minutes, we fought our way back into the game against an outstanding opponent. It took us a bit of time to get into the game, but after we did we deserved to win.”

Theodor Gebre Selassie: “This was a very important game for us and a massive three points after things went so badly in the last match. We showed how good we can be today and we are delighted to have picked up the three points. We fought our way back after going behind and I felt it was a highly deserved victory.”

Florian Kohfeldt: “We were under a lot of pressure after the last game. We had a hard time getting into the game initially as Frankfurt were in control for the first 25 minutes. But we defended very well and were dangerous pushing forward as well. I’m extremely impressed with what I saw tonight. We were at our best this evening against one of the best sides in the league.”

On the next games:

Kevin Möhwald: “We have to base our approach to the next few games on tonight's performance. We have some very important games coming up, first in the DFB-Pokal and then on Sunday in Cologne. These are games that we have to win. Now it's a case of recovering well and preparing for the match against Regensburg.”

Josh Sargent: “It's a tight battle at the bottom of the table so we are keen to get every point we can. Today's win is especially important for us as we move into the next few weeks.”

Optimism for Füllkrug, Augustinsson ruled out of ...

“The goals we conceded were just too easy”

10.04.2021 / Match Report
Your web browser ist outdated.
The web browser you are using is no longer supported.
Please download one of these free and up to date browsers.
Why should I use an up to date web browser?