“The goals we conceded were just too easy”

Views on the defeat to RB Leipzig

A poor first half was the undoing of Werder on Saturday afternoon as they shipped three goals before the break. Florian Kohfeldt and his players felt that the goals in the 4-1 defeat we conceded too easily: “I’m not happy with the way we conceded the goals at all. We were poor defensively and we were too careless,” said SVW’s head coach after the final whistle. “Having said that, I’d rather we take risks and try things. I don’t want us to sit back from the first minute.” 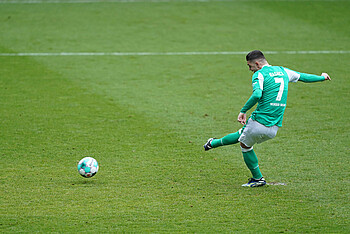 Florian Kohfeldt: “We did set out to take risks, but that’s not the reason for the goals we conceded. The goals came because of our carelessness. I'm not happy with the way that we conceded them. We didn't close them down well enough out of possession. But we kept going and didn't give up at any point. We improved in the second half and the boys didn't give up. I’d rather we take risks and try things. I don’t want us to sit back from the first minute.”

Christian Groß: “We’re all feeling very frustrated and disappointed naturally. We had a lot of things planned but we weren't able to make them work. We had a very poor first half and found ourselves three goals down at the interval. We were always second to the loose balls and weren't aggressive enough in duels. Leipzig stayed ice cold and deserved their win, but in the second half we tried our best to fight back and get into the game.”

Niklas Moisander: “We tried to play with courage but it didn't work out in the end. Leipzig are a great team but the goals we conceded were just too easy. We weren't aggressive or focused enough. When we scored, we believed that we could get back into the game but they quickly sealed their win. We didn't give enough against a top team, but I think that we can build on our second half performance.”

Davie Selke: “It's always difficult to put a defeat behind you. It was very disappointing for all of us. No matter who you're playing, you never want to concede four goals at home. It was important for us to show character after half time and we did that, which is something that we can build on. Maybe if we could have made it 3-2, we might have had a chance. We can take the positives from the second half with us.”

On the Bundesliga table:

Davie Selke is keen for Werder to build on the second half performance (nordphoto).

Florian Kohfeldt: “We know what the schedule has in store for us. We are in the middle of a tough run of opponents at the moment. We still need a minimum of two wins and we have to be always looking to pick up points. We always have one eye on the teams below us in the table. We're not in a bad position right now but we still have difficult games to come. The key is not to panic and to just keep going. We have to believe in ourselves.”

Christian Groß: “Relegation is always something in the back of our minds. We've had a tough week this week but will be looking to pick up points from the next few games.”

Davie Selke: “We know that we still need more points. I'm sure if we can build on the way that we played in the second half, we’ll get there. It's important to keep in mind that we are not there yet though, despite our current situation being okay.”