A new role for Ömer Toprak

The 1-1 draw against TSG Hoffenheim earlier this season may not stick in the mind of Ömer Toprak, but it was an important turning point for Werder’s centre-back. It was the last Bundesliga game in which Toprak did not feature. Since then, things have been going well for the 31-year-old. “I’m happy with the way things are currently,” he says in an interview with WERDER.TV. “I don’t think many people believed it would be like this again.”

It might be too much to speak of a triumph over adversity or a comeback, but there is definitely a lot of satisfaction for Toprak when he considers the way this season has gone so far. After all, the Ravensburg-born player suffered an injury-blighted 2019/20 season and was only able to play the full 90 minutes on five occasions, missing out on the end of the campaign altogether. “Last year was extremely tough,” recalls Toprak, shaking his head as he remembers last season. His many absences were symptomatic of a season in which Werder suffered a number of setbacks. The constant questions about his fitness don’t annoy the centre-back too much though. “It was obvious that people would be asking those sorts of questions after last season. It’s okay.” 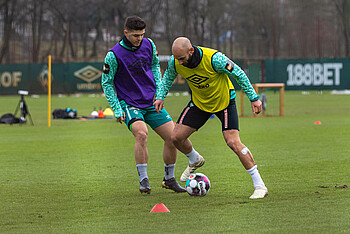 Ömer Toprak has established himself in Werder’s starting XI thanks to thorough training (nordphoto).

This season, Toprak has regained the trust and confidence in his own body through thorough training sessions. As a result of these sessions, the 31-year-old has now started 14 consecutive Bundesliga matches and is listed as the highest-rated Werder player of the campaign so far in kicker magazine. Alongside this is his success rate of 69.9% in duels, which puts him in second place in the league. As the central defender in a back three, his role extends past that of just his defensive duties however. Time and time again, Toprak is involved in build-up play for Florian Kohfeldt’s side, carrying the ball forward and urging the team on. “That’s something I enjoy a lot. I love contributing offensively!” he says as he describes playing in a back three for the first time in his long career of over 250 Bundesliga appearances.

For SC Freiburg, Bayer 04 Leverkusen and for Borussia Dortmund, Toprak was deployed as one of two centre-backs in a back four. At Werder he is thriving in his new role, but remains modest about his performances, nonetheless. “I don’t think you can say that it’s just me playing well as a result of the formation; we play better as a team. I can only play as well as my teammates at the end of the day.”