SV Werder Bremen overcame the physical challenge of the friendly to comfortably defeat FC Groningen. At the end of two very different halves, the Green-Whites came out 4-0 winners in the Heinz-Dettmer stadium in Lohne. Josh Sargent (10’), Johannes Eggestein (15’), Leonardo Bittencourt (24’) and Tahith Chong (34’) scored the goals in a powerful first half display. There were few chances for either side after the break, and Florian Kohfeldt’s side recorded a deserved victory.

Line-up and formation: Florian Kohfeldt opted for an eleven made up of both first team regulars and those challenging for a place in the side. The defence consisted of players in their natural positions, but Nick Woltemade played in central midfield alongside Leonardo Bittencourt. Striker Josh Sargent was accompanied by Tahith Chong and Johannes Eggestein on the wings. 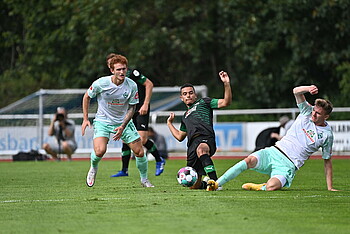 Werder were on top of the Dutch first-division side (photo: nordphoto).

10th min: Goooaaal! Josh Sargent gets the first of the game. Ludwig Augustinsson sends a low ball into the box, Sargent picks it up in the penalty area, gets past the defender and shoots with his left foot. The low shot sails into the far corner of the Groningen goal.

15th min: Goaaal! Johannes Eggestein makes it 2-0 just five minutes later! After a good bit of play by Patrick Erras, Werder’s number 24 made no mistake from five metres out with his left foot. He’s ice-cool in front of goal. It’s his third goal of pre-season.

24th min: 3-0! This time it’s Leonardo Bittencourt. The Groningen keeper can only parry a low drive from Johannes Eggestein, and Werder’s number 10 capitalised to hammer home from close range.

34th min: And another! 4-0 for Werder. Tahith Chong gets his first goal in a Werder shirt! The winger gets the ball in midfield, gets past two opponents and fires it into the bottom left corner with his left foot from the edge of the box.

Not much of note after half time 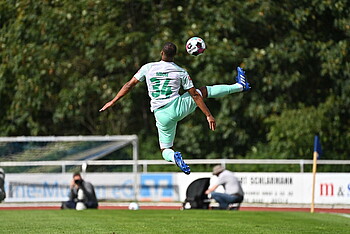 70th min: A good effort from 20 metres by Groningen’s Ramon Pascal Lundgvist! Jiri Pavlenka turns it behind for a corner which comes to nothing. The guests aren’t posing much danger in the second half either…

85th min: Sam Schreck fouls Leonardo Bittencourt on the edge of the box. Bittencourt chooses to take the free kick, from a central position, himself. The shot is too close to keeper Sergio Padt who makes the save.

90th min: The final whistle. Werder deservedly win by a big margin. The first team of the day can now make their way back home and recover in Bremen.

Match summary: SV Werder recorded a fully deserved victory on this important afternoon in pre-season. The Green-Whites were particularly dominant in the first half against FC Groningen. Groningen couldn’t cope with Werder’s attacking play before the break, but Danny Buij’s team improved in the second half. SVW had the chance to score a fifth late in the game through Bittencourt’s free kick.

Keeping up the momentum

Taking the next step

26.09.2020 / First Team
Your web browser ist outdated.
The web browser you are using is no longer supported.
Please download one of these free and up to date browsers.
Why should I use an up to date web browser?