SVW lose 4-1 at home in the Bundesliga

SV Werder were beaten 4-1 at home by RB Leipzig on Saturday afternoon in a one-sided affair. Head coach Florian Kohfeldt’s team were unable to stop the side in second place. Goals from Dani Olmo (23’) and a first half brace from Alexander Sørloth (32’,41’) meant that the Green-Whites went into the break three goals down. Three substitutions at half time reinvigorated Werder, however, and Milot Rashica was able to pull a goal back from the spot (61’). Leipzig quickly restored their three-goal cushion though as Marcel Sabitzer sealed the win with his strike just two minutes later. A deserved defeat against a highly efficient opposition.

Line-up and formation: Florian Kohfeldt made five changes to the team that triumphed in the DFB-Pokal in the week. Niclas Füllkrug and Ludwig Augustinsson were missing through injury, while Maxi Eggestein missed his first game of the season due to a yellow card suspension. Felix Agu and Ömer Toprak returned to the defence, with Manuel Mbom slotting into midfield. Davie Selke came in for cup scorer Yuya Osako, joining Eren Dinkci up front who made his full Bundesliga debut. Milos Veljkovic was also back in the squad and came off the bench. 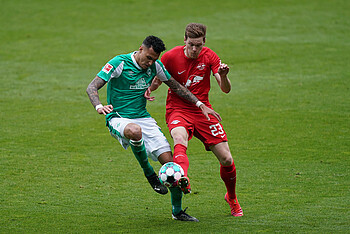 Werder were pegged back by three first half goals (nordphoto).

13th minute: The first big chance goes the way of the visitors. Christopher Nkunku sends a cross-field ball to Justin Kluivert, who touches it down but shoots into the side netting under pressure from Ömer Toprak.

22nd minute: An opening for debutant Eren Dinkci, as he finds himself in space in the Leipzig box. The youngster takes on the shot but watches his strike fly just over.

23rd minute: Goal for RB Leipzig, scored by Dani Olmo. Kevin Kampl flicks the ball onto the Spanish international, who curls a shot past Pavlenka to open the scoring.

27th minute: Best chance so far for Werder! The ball is whipped in from a corner and Davie Selke rises highest in the box, but the striker’s header drops narrowly wide of the post. Close!

32nd minute: Goal for RB Leipzig, scored by Alexander Sørloth. Christopher Nkunku floats an inviting ball into the box and the Norway international meets it with his head to double the visitors’ advantage.

41st minute: Goal for RB Leipzig, scored by Alexander Sørloth. Willi Orban sets up the striker for his second of the afternoon.

The Roten Bullen seal the win 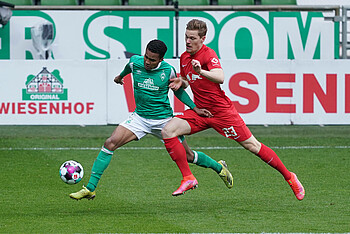 Felix Agu returned to the team in place of the injured Ludwig Augustinsson (nordphoto).

51st minute: Davie Selke wins a free kick which is taken by Milot Rashica. The Kosovan hits it well but it’s rising and clears the crossbar.

61st minute: Goal for Werder! The ball bounces off the arm of Kevin Kampl and the referee points to the spot. Milot Rashica steps up and calmly converts from the spot to pull one back!

63rd minute: Goal for RB Leipzig, scored by Marcel Sabitzer. Leipzig instantly bite back as their captain finishes past Jiri Pavlenka to restore the three-goal lead.

70th minute: Milot Rashica goes for goal, but his connection is poor and Péter Gulácsi makes a comfortable stop.

Conclusion: A deserved victory for Leipzig, who made the most of their chances in a clinical attacking display. Werder tried to break down Julian Nagelsmann’s team but were only able to score from the spot after Kevin Kampl handled the ball. Leipzig kept up the pressure and sealed the comfortable win.