It was a bad evening in Sinsheim for the Green-Whites, as Florian Kohfeldt’s team were comfortably beaten 4-0 by TSG Hoffenheim. On target for the hosts were Bebou (26’), Baumgarnter (44’), Dabbur (49’) and Rutter (90’). Despite periods of decent passing play, Werder were unable to pack a punch at either end of the pitch and fell to a heavy defeat as a result. It will take a much better performance to get anything out of next Friday’s match against Eintracht Frankfurt.

Line-up and formation: Head coach Florian Kohfeldt made two changes to the eleven that started the 0-0 draw against SC Freiburg. Felix Agu returned to the starting XI in place of the injured Ludwig Augustinsson, while Romano Schmid was replaced by Leonardo Bittencourt. Kohfeldt’s team lined up in a flexible 3-5-2 system against the side from Baden-Württemburg.

Hoffenheim ruthless in front of goal 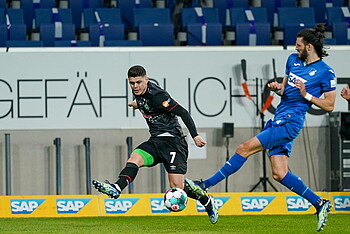 Milot Rashica and co. were unable to break through the TSG defence (nordphoto).

5th minute: The ball is whipped into the Hoffenheim penalty area from the left-hand side and Ömer Toprak stretches to reach it but cannot quite make contact. The ball flies just wide of the right-hand post for a goal kick.

12th minute: The hosts advance and Christoph Baumgartner finds himself in space in the Werder box. He directs a low effort towards the middle of the goal but it’s a comfortable save for Jiri Pavlenka.

19th minute: Toprak is again causing the home defence problems as he rises highest to connect with a Leonardo Bittencourt corner, but he can only direct his header at TSG keeper Oliver Baumann who saves.

24th minute: Felix Agu charges into the TSG box and falls under a challenge from a Hoffenheim defender. The referee waves away the Werder protests and play continues.

26th minute: Goal for Hoffenheim. Ihlas Bebou is played through by Diadie Samassekou and bears down on goal before finishing smartly across Pavlenka. The assistant referee initially flags for offside but VAR intervenes to confirm the goal for TSG as Bebou had timed his run perfectly.

39th minute: Werder push forward and the ball drops kindly for Milot Rashica. He lines up a shot and pulls the trigger but sees his effort blocked by a blue shirt.

44th minute: Goal for Hoffenheim. The hosts double their advantage as Christoph Baumgartner exchanges a one-two with Munas Dabbur and then forces his way through the Werder defence before sliding a low effort under Pavlenka. 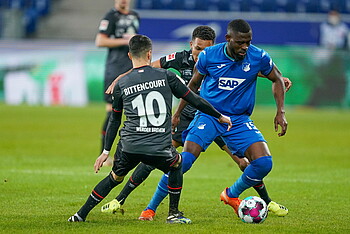 Werder struggled to make anything work in defence or in attack (nordphoto).

49th minute: Goal for Hoffenheim. Munas Dabbur finds space and receives the ball from Ihlas Bebou who cuts it back from the touchline. The Israeli forward touches it down well and makes no mistake as he fires home to make it 3-0.

64th minute: Andrej Kramaric makes a run into the box and the ball is played into the Croatian. He fires off a shot on goal that is superbly blocked by Theo Gebre Selassie to prevent a fourth.

67th minute: Bebou again sprints at the Werder defence, who are really struggling to keep him in check. Luckily, Marco Friedl is on hand to make a last-ditch clearance.

88th minute: A chipped ball is played into the Hoffenheim box and Niclas Füllkrug jumps to control it with his chest. The defender nips in and steals the ball away from the German before he can get a shot away, however.

90th minute: Goal for Hoffenheim. Georginio Rutter controls a pass well on the edge of the area and fires a low effort into the bottom right corner to make it four.

Conclusion: A bad day at the office for Werder. Things simply were not clicking for Kohfeldt’s team in any area of the pitch and the Green-Whites gave a ruthless and highly efficient Hoffenheim team far too much space. In short, Werder have to significantly improve to have any hope of taking any point’s from Friday’s clash against a very in-form Frankfurt side.

Toprak: “I take the responsibility on myself”

Increasing the intensity and regaining self-conf ...

Looking ahead to Frankfurt

Baumann: “We have to respond to this setback”

“We didn’t offer anything today”

21.02.2021 / First Team
Your web browser ist outdated.
The web browser you are using is no longer supported.
Please download one of these free and up to date browsers.
Why should I use an up to date web browser?