As expected, it was a tough test for Werder Bremen. Head coach Florian Kohfeldt’s team had to fight hard but held their own against TSG 1899 Hoffenheim, emerging from the home encounter in front of empty stands at the wohninvest WESERSTADION with another point on the board. A lightning start from Maximilian Eggestein put SVW into an early lead (5’), before TSG pulled one back through Dennis Geiger (22’) to ensure that the points were shared, meaning that Kohfeldt’s side are now unbeaten in their last four matches.

Line up and formation: Florian Kohfeldt made two changes from last week’s draw away to SC Freiburg. Christian Groß replaced the injured Ludwig Augustinsson, while Niklas Moisander was brought into the starting XI with Nick Woltemade making way. Tactically, Werder set up in a 4-3-3 formation with an attacking trio of Füllkrug, Bittencourt and Sargent.

A competitive first half 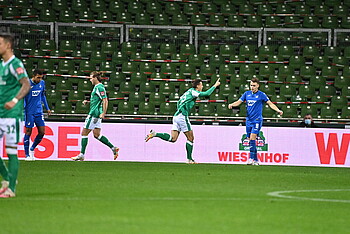 5th minute: Goal for Werder! Maximilian Eggestein gives SV Werder Bremen the lead! Theodor Gebre Selassie is played in on the right and manages to find Maxi on the edge of the box, who slams a first-time effort into the back of the Hoffenheim net. A perfect start!

15th minute: TSG turn up the tempo in search of an equaliser. The attack comes down the right and the ball is played to Christoph Baumgartner, but his long-range effort flies over the crossbar.

22nd minute: Goal for Hoffenheim. Dennis Geiger nets the equaliser for TSG. Hoffenheim’s pressure pays off as the ball lands with Sebastian Rudy, who pulls it back for Dennis Geiger in the middle. He is able to keep his shot down, driving an effort beyond Jirí Pavlenka.

37th minute: Niclas Füllkrug is forced to leave the pitch early due to injury. The 27-year-old has a calf problem and cannot continue.

41st minute: A free kick for the Green-Whites in a good position.  Leonardo Bittencourt stands over it, but his effort flies past the post. Not far off!

44th minute: SVW lucky not to go behind! Munas Dabbur scuffs his effort in front of Pavlenka before Robert Skov shoots over the bar.

45th minute: Great save from Jirí Pavlenka! Munas Dabbur finds some space in the box and tries a shot from close range that Pavlenka is able to parry with his right shoulder. An important stop! 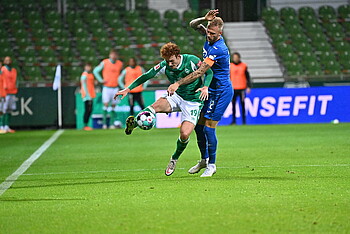 The second half was competitive, but ultimately goalless (photo: nordphoto).

47th minute: The second half gets underway with a lot of speed! Kevin Akpoguma gets in on the right but is fortunately stopped on the edge of the box.

49th minute: Goalscorer Dennis Geiger gets the run of the ball and puts his boot through it. Marco Friedl is in the way to deflect it to safety.

59th minute: Close from Werder! Leonardo Bittencourt breaks through and is in on goals. His effort beats the goalkeeper but rebounds off the post. However, the flag was up anyway so it wouldn’t have counted.

72nd minute: Milos Veljkovic with great defensive work! Munas Dabbur almost breaks through into the box but our Serbian defender is there to snatch the ball with a perfect challenge.

80th minute: A free kick at the other end sees TSG go close. Robert Skov grazes the crossbar with a powerful effort. A close call for Werder.

84th minute: Hoffenheim go close again, as Robert Skov dribbles down the right. Jirí Pavlenka is able to clean up at the end of the move and ensure that the points are shared.

Conclusion: A point won against Hoffenheim! As expected, it was a difficult and hard-fought match. A perfect start from Maxi Eggestein was cancelled out by Dennis Geiger’s equaliser. From then on, the game was increasingly competitive, with TSG marginally on top for periods. However, SVW defended well and after a fighting performance were able to get another point on the board. A big blow is Niclas Füllkrug’s calf injury.

A great performance rewarded with a point!

17.11.2020 / First Team
Your web browser ist outdated.
The web browser you are using is no longer supported.
Please download one of these free and up to date browsers.
Why should I use an up to date web browser?