Points shared away to Leverkusen

Werder had to settle for a point on Saturday afternoon as they drew 1-1 to Bayer 04 Leverkusen in the first away match of the New Year. Ömer Toprak put the Green-Whites in front after Ludwig Augustinsson's free-kick (52’), rewarding the Green-Whites’ strong defensive performance. Leverkusen, sitting third in the table, struggled to break down Florian Kohfeldt’s team until Patrik Schick struck to put the hosts level (70’), ensuring the points were shared.

Line up and formation: Werder coach Florian Kohfeldt made four changes to the starting XI for the first away game of 2021 against the Werkself. Kevin Möhwald, Milos Veljkovic, Tahith Chong and Jean-Manuel Mbom were brought into the team. Leonardo Bittencourt and Romano Schmid dropped to the bench while Yuya Osako was not included in the matchday squad. Christian Groß and Patrick Erras were sidelined with muscle injuries picked up in training, so Ilia Gruev and Mainz goal scorer Eren Dinkci travelled to Rheinland in their place.

A solid defensive display keeps the hosts at bay 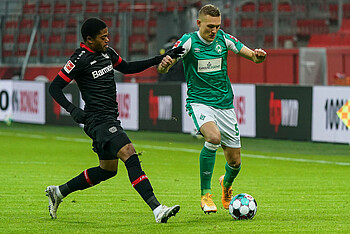 3rd minute: An early opening for the hosts as Moussa Diaby beats Milos Veljkovic and drives into the final third before unleashing a powerful drive that flashes just wide of the post. An early warning for Kohfeldt’s team!

10th minute: Strong play down the left for Leverkusen leads to the ball being chipped into the middle of the box where Leon Bailey is waiting. The Jamaican meets it on the volley but scuffs it and it’s an easy save for Pavlenka.

13th minute: Ludwig Augustinsson is brought down on the corner of the box and the referee awards Werder a free kick from a promising position. Kevin Möhwald steps up to take it but it’s cleared to safety by the Leverkusen defence.

26th minute: Julian Baumgartlinger takes a shot from around 20 metres out that flies just wide of the upright.

28th minute: Werder’s left-back is again involved as he whips in a free-kick towards the far post. However, it’s just too far beyond Josh Sargent for the American to make contact and it goes for a goal kick.

30th minute: A long ball finds its way to Josh Sargent who slips it through to Kevin Möhwald. The midfielder finds himself in a dangerous position in the Leverkusen box but Kerem Demirbay slides in to block before Möhwald can pull the trigger. 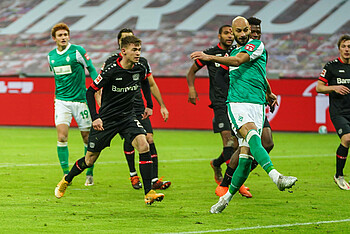 52nd minute: GOAL FOR WERDER! The boys in green take the lead through Ömer Toprak, as he scores against his former club! Ludwig Augustinsson whips in a low free kick to the near post that catches out the Leverkusen defence, leaving Toprak in space to cooley sidefoot home past Lukáš Hrádecký. Advantage Werder!

66th minute: Lucas Alario tries an effort from 17 metres out but sees his shot blocked by teammate Patrik Schick.

70th minute: Goal for Bayer Leverkusen, scored by Patrik Schick. Lucas Alario touches down a long ball and takes it past Marco Friedl towards goal, with the ball appearing to touch his arm. After a brief scuffle, Patrik Schick steps up and manages to get it into the net off Ludwig Augustinsson. Referee Benjamin Cortus initially rules it out but after a long VAR check, the goal is given to make it one-apiece at the BayArena.

78th minute: The team in third place are looking for a winner as they turn up the pressure on Florian Kohfeldt’s team. Nadiem Amiri takes on a shot from distance but sees it blocked.

82nd minute: Lars Bender tries to prevent a corner by playing it back to Lukáš Hrádecký, but the keeper doesn’t control it well and the ball almost finds its way to Romano Schmid who has come sprinting in. However, the goalkeeper reacts quickly and knocks the ball away to safety.

Conclusion: Head coach Florian Kohfeldt’s team started the game well and put in a solid defensive display in the first half, making things difficult for the Werkself and keeping Leon Bailey and co. at bay. Following a first half with very little action and few dangerous chances, it was Werder who were able to break the deadlock as they took the lead through Ömer Toprak after Ludwig Augustinsson's free-kick (52’). Although the Green-Whites continued to keep it tight at the back, the hosts eventually were able to break through, with Patrik Schick finishing after a lengthly VAR check (73’). Werder take a point back to Bremen.