SV Werder Bremen took all three points back up north after a 3-1 win over FC Schalke on Saturday. Head coach Florian Kohfeldt felt it was a "deserved win" and a "good performance for large parts". Left-back Ludwig Augustinsson, who assisted all three of Niclas Füllkrug's goals, praised the side's attitude.

Werder.DE has summarised the post-match quotes.

Niclas Füllkrug: “We are happy that we won convincingly today. Their goal at the end was a bit frustrating, but we’re happy overall that we won an important goal. I think we won the key tackles – both up front and in defence – this is how you win games. We scored goals at the right moments, so we deserved to win, even if it was a hard-fought game.”

Ludwig Augustinsson: “We had the right mentality, aggressiveness and hunger for goals from the first minute today. Everything was better today. We started pressing them high up the pitch and that worked. We know that we need to play with this style in every game. We didn’t against Hertha. If we do, we have the quality to win games. We showed that today.”

Florian Kohfeldt: “The performance was very good for large parts of today’s game, especially regarding our intensity. We spoke about taking that final step and being confident before the game. We had a lot of chances, but were a bit sloppy in the second half, especially on the ball. Today’s game didn’t have a lot of good football in it. But we wanted to get behind their defence as we know that their full backs push up. The lads did that really well. We deserved to win for me. Everyone saw what is required to a win a Bundesliga game. I am pleased with today.

Frank Baumann: "It was important to show a reaction and play better. The team did that from the very first second. We were good up front and ran hard, defended well and tackled well too. We managed to play well across 90 minutes today, unlike last week. It was obviously going to be an intense, hard-fought game. We accepted that challenge and scored goals at the right time." 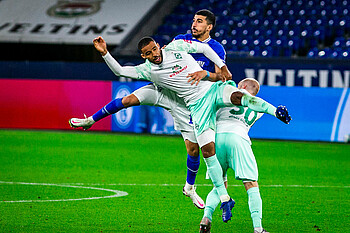 Jean-Manuel Mbom put in a fine display on his debut (Photo: nordphoto).

Florian Kohfeldt: “He did really well. He knew at the start of the week that he would play. He was the first player that I told. I spoke to him today to give him a final briefing and he said “So I’m actually playing!?” I don’t think he believed me, but he did well. He brought his dynamism onto the pitch that we wanted. He is incredibly physical. He kept it simple. I’m pleased for him.” 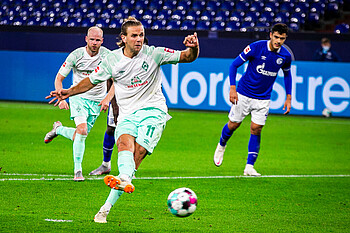 Niclas Füllkrug: “I think you know what you will get from me. Not necessarily goals, but I think I bring a certain attitude onto the pitch with me, which helped the team today.”