“I’ll keep giving it everything I’ve got”

As the Bundesliga season reaches its climax, Werder’s captain will be as important as ever over the next few weeks. Niklas Moisander sat down for the midweek press conference on Wednesday morning and discussed his match fitness, upcoming opponents Borussia Dortmund, and his role in the team. 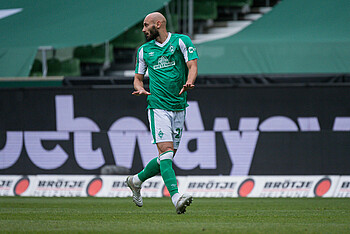 Ömer Toprak will be out for several weeks with injury (nordphoto).

…the current phase of the season: “We are all well aware of the importance of this phase of the season. It’s clear that we have to keep fighting to pick up points, otherwise we’ll be in a dangerous situation. We’re fully focused on Sunday, but we know it’s all about points in the long run.”

…the injury to Ömer Toprak: “Ömer has had a great season so far and has been playing really well. He's a key member of the team. Now he's out, it's up to us to step up and fill that role. We need every player to play their part at this point in the season, as we've emphasised before.”

…Borussia Dortmund and Erling Haaland: “We have to keep a positive attitude in this phase of the season and continue to work hard so that we’re well prepared for the Dortmund game. It will be very important to be aggressive and to defend well as a team, especially in and around our own box. You simply cannot lose focus against a top player like Erling Haaland. He’s already such a good player. We played well last time against BVB and I thought we were unlucky not to pick up any points. That gives us confidence, but we need no reminders of the quality that they have. If we can give it everything we have though, anything is possible.”

…the amount of playing time he has had: “Not playing as much is something new for me and it was tough in the beginning. But I give my all in every training session and I'm always doing everything I can to be ready to play each day. Physically I feel great, and I’ll keep giving it everything I’ve got until the end of the season.”

…up-and-coming players in the squad: “I always think it's a good thing when younger players come to me and ask for advice. I get the feeling that they all want to have a good career here with us and want to work hard on their development. As someone in the position of a role model, I’m always trying to do my best. I want to show the younger boys that that is the key to being successful.”

…Jiri Pavlenka: “Jiri has been an extremely important player for us for a number of years. He brings a lot of balance to the team with his calmness under pressure. It’s always a good feeling to know he’s behind you when you’re playing. He’s had a great season, but he still hasn’t reached his ceiling. I see him as one of the top six keepers in the Bundesliga.”