Clemens Fritz on the table, the game against Dortmund and Moisander.

Following last weekend’s defeat against RB Leipzig, Werder will be looking to avoid getting dragged into a relegation battle as the end of the season draws near. The Green-Whites will be up against another top team this weekend in Borussia Dortmund. In an interview, Clemens Fritz made one thing clear: “Of course we’ve been faced with tough opponents in recent weeks, but we will take a positive approach into our upcoming challenges.” 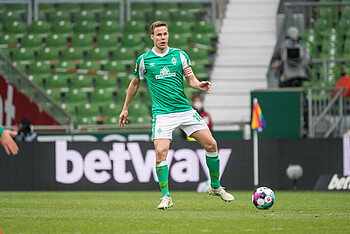 Niklas Moisander is a strong role model within the team (Photo: nordphoto).

…the situation in the table: “Our goal is quite clear: to stay up, which is something we want to achieve. We’ve never felt safe, because we’ve experienced too much already and we’ve communicated that quite clearly along the way. The fact of the matter is, if we pick up points as quickly as possible, then we won’t have to play catch-up later on.”

… Niklas Moisander: “The way in which Niklas has behaved himself here, despite seeing limited playing time, sets a great example. He gives his all for the team, both on and off the pitch, which makes him an important player for us. Whenever he’s on the pitch, he’s fully engaged and delivers. That’s one of his best qualities.”

…the young squad: “Our focus was to build a young and well-functioning squad. Over the summer, we added a lot of young players. This season, we knew that there would be setbacks. However, we have been and continue to be convinced of our players and their talent.”

… Nick Woltemade: “As a young player you need patience, because making the leap to the first team is not easy. Nick can continue to develop with each training session. We’re very convinced by his abilities. He just needs experience to continue developing.”

…the upcoming game against Dortmund: “We know how strong and talented Dortmund are. Of course they’ve suffered some upsets in the league this season. However, they still have a lot of individual talent. We will need to be compact and play with courage this weekend.”