Looking ahead to Frankfurt

Maxi Eggestein on the table, Kohfeldt, and Friday’s game against Eintracht

It’s fair to say that Maxi Eggestein and his teammates had imagined the game against TSG Hoffenheim going differently beforehand. “The evening after the game wasn’t pleasant for any of us obviously,” says the 24-year-old, who wants to come to terms with the 4-0 defeat before putting it completely behind him. However, one eye is on Friday’s game against Eintracht Frankfurt which is fast approaching. For Eggestein, the approach to the game is key and he is helped in this by his close relationship with Florian Kohfeldt.

At first glance, the loss in Sinsheim has not altered the Bundesliga standings dramatically in terms of Werder’s position. Florian Kohfeldt’s side sit five points above the drop zone with a game in hand following the match that was called off against Arminia Bielefeld. “We have that game in hand, but of course we’re always looking over our shoulder at the relegation places,” says the midfielder. For Eggestein, the gap is not enough to be comfortable: “Other teams around us are also picking up points so we have to ensure that we keep on doing the same.”

Eggestein: “The boss knows what he’s getting from me” 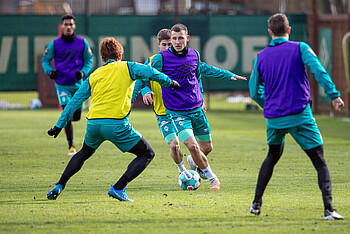 Eggestein and co. have a shorter training week to prepare for Friday’s game (nordphoto).

In order to achieve this goal, Werder must return to playing cohesive football as a team again following the setback against TSG Hoffenheim, as Baumann stated on Monday in a press conference. As one of the first names on the teamsheet, Maxi Eggestein is able to act as a link between the coaching staff and the squad. “The boss knows what he’s getting from me and I know what he wants to see out on the pitch. That’s something I want to be able to pass onto the younger players,” says the Hanover native on his relationship with Florian Kohfeldt.

The Green-Whites welcome Eintracht Frankfurt to the wohninvest WESERSTADION on Friday evening (20:30 CET). “Frankfurt have always been known as a side that don’t overcomplicate things and have a good pressing game,” says Eggestein as he looks ahead to the game against Adi Hütter’s side. He and the rest of the Werder team will be hoping that they can start matchday 23 in a much different way to how they finished the last one.