Maximilian Eggestein missed our last fixture after picking up a yellow card suspension, but the midfielder will be available once again for the clash with Borussia Dortmund this weekend. The 24-year-old spoke to the media on Thursday morning, expressing a desire to get the “basics” right on Sunday. “It’s important that we get back to performing like we have done in the past, like against Frankfurt for example. We have got some of the basics wrong of late,” said Eggestein.​​​​​​​

He discussed his suspension and the upcoming Bundesliga fixtures with the virtually gathered press. WERDER.DE sums up what the midfield man had to say. 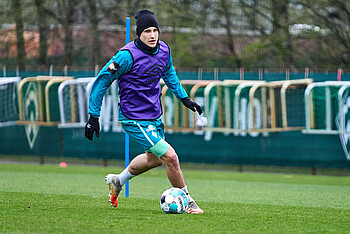 Maximilian Eggestein has been an important building block in the Bremen midfield for many years now (nordphoto).

Werder’s number 35 was forced to watch on from the sidelines during our last fixture against Leipzig. Eggestein made it abundantly clear that players would always prefer to play than to sit helplessly in the stands: "Obviously it isn’t a nice feeling. In the future I will try and avoid it. When you sit on the sidelines, you feel a bit helpless. I don’t want to experience that any more often than I have to.” Eggestein and co. will go up against fifth-place Dortmund on Sunday. While our opponents fight for a European spot, the Green-Whites are looking for points to keep them out of trouble above the relegation zone.

The match against BVB marks the start of a busy week for Werder: “We have three important games coming up but we are not putting too much weight on them. We always want to get points and there are plenty up for grabs this week.” Eggestein is demanding that Werder get the fundamentals right in order to collect as many points as possible. That has been lacking in recent weeks and only by getting that right can we emerge victorious from the games to come: “The basics have gotten away from us in recent weeks. We have to force the opposition into challenges on the pitch and then get at them with our pressing.”

The man from Hannover is optimistic looking at the current situation. While the Green-Whites were forced to rely on other teams dropping points last season, the team has it in their own hands this year. “The current situation is much more comfortable for us because we don’t have to chase anyone down. That’s much easier mentally.” The match in Dortmund could be a good place to start as we look to pick up the necessary points in the fight for survival.