Romano Schmid had been waiting for an appearance for a while before his chance arrived quite suddenly. “Romano is one of those guys you have to get to know over the course of the season,” said head coach Florian Kohfeldt of the young Austrian at Thursday’s pre-match press conference. At the start of the season, Kohfeldt asked Schmid to be patient, and now this patience is paying off. Schmid celebrated his full Bundesliga debut away at RB Leipzig and has since been included in the starting XI a number of times, giving him the opportunity to prove himself in Germany's top tier.

However, his start to this season was a bit of mixed bag. “He showed real quality during pre-season but then dropped off in terms of performance,” describes Werder’s coach. “Then we talked a lot about he could build up consistency in terms of his play and behavioural patterns in training,” continues Kohfeldt. 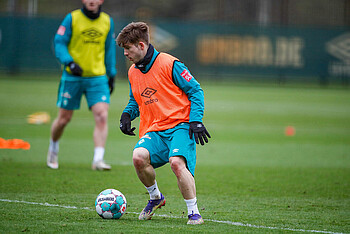 Romano Schmid putting in the hard work on the training pitch (photo: nordphoto).

This didn’t include Schmid’s defensive work which, as Kohfeldt explains, has always been good. However, the 20-year-old talent still has some aspects of his game that need honing further. “How do I impose myself on the opposition? What is the best way of finding space? When should I time my runs from deep? How can I be level-headed in possession and make the right decisions more often?”, he names as examples of these.

To achieve the goals set for him by his coach, Schmid has been working relentlessly on developing his game – with success. “The moment came to put him out there and see how he performs at that level. I have to say, he really impressed me,” praised Kohfeldt. The Austrian youngster has shown he is tactically adept and can also make his own decisions in the moment. In addition to this, Schmid has shown signs of his danger in front of goal and of his pace off the mark. According to Florian Kohfeldt, it is now a matter of working on his decision-making between the lines and his hold-up play with his back to goal. With these improving, the coach sees the talented 20-year-old as being on the right track in terms of development. “Romano is one of those players on the up,” emphasises Kohfeldt. “He works hard on his own game and is very ambitious. He’s a good lad and we’ll continue to help him grow and improve together.”