“We couldn’t switch on”

Reaction from the match against Hertha BSC

The 2020/21 season got off to a bad start for Werder as they were defeated 4-1 by Hertha BSC on Saturday, much to the disappointment of Florian Kohfeldt and his team. He summed up, ”at the end of the day, we deserved to lose.” In the view of Werder’s head coach, the Green-Whites had the chance “to take control of the match” shortly before half time, but were unable to switch on and capitalise. As a result of this, the team from the capital struck twice to set up an away victory.​​​​​​

Views on the match:

Niklas Moisander: “It was a tight game in the first half, but we still conceded two just before half time. We gave it all we had but was difficult for us to get back into the game after that.”

Davy Klaassen: “We played the way we wanted to for the first 40 minutes, but after the two first-half goals, it wasn’t enough. We just made too many mistakes. But next week we’ve got another game and we’re going to work hard this week to prepare for that.”

Davie Selke: “We conceded two goals just before half time, which was a really bad time to do so. I thought we started the second half well and we were unlucky to concede the third. After we made it 3-1, we put a lot of pressure on the opposition and didn’t let ourselves down, even when they scored their fourth. That really speaks volumes on the team. The result wasn’t what we were hoping for, but it’s only the first game of the season.” 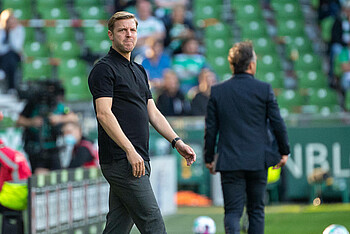 Florian Kohfeldt: “At the end of the day, we deserved to lose for a few reasons. The principle reason was the first 35 minutes of the game. We had space and opportunities and we played some good football, so we had the chance to take control of the match. But we couldn’t switch on and pressure them; I felt like we didn’t make our presence in the game felt. For the first goal, our pressing was lacking and the second goal was poor marking. That was really annoying because it was something we’d covered in training. Before their second goal, we were poor in possession which is something that shouldn’t be happening to us. When we made it 3-1, we had a chance to get back into the game, but the fourth goal really settled the match. It wasn’t good enough for the Bundesliga in a lot of ways, but especially in terms the way we approached the game tactically.”

Frank Baumann: "Both the result and the performance are disappointing, especially from the 40th minute onwards. Up to that point, both teams were very cautious, and we were on top for periods. Defensively we were pretty good until then and we were winning the ball back well, but we didn’t do enough with it. But we wanted to take control of the game. After Hertha’s goal, we didn’t push forwards and instead dropped deeper. We didn’t offer enough and we were too passive. The belief in our game that we spent so long looking for last year and only started to find again after the restart just wasn’t there. That was noticeable when we were in possession but even more when we were defending. We need to rediscover this belief."

Views on the fans’ return:

Florian Kohfeldt: “Basically, it was a great feeling to play in front of the fans again. I heard that everything was carried out in according to the rules and was very well disciplined. It was a lot different to the games behind closed doors, and the atmosphere around the stadium was great as well. During the game, it was still different from the way we know it of course, but it was nice that a first step has been taken.”

Frank Baumann: There was a good atmosphere again and that's a big positive. The way everything was implemented and the observance of the regulations was exemplary. This reflects well both on the concept of social distancing at football matches, and on the behaviour of the fans. There was also positive feedback from the authorities which is great."

15.10.2020 / First Team
Your web browser ist outdated.
The web browser you are using is no longer supported.
Please download one of these free and up to date browsers.
Why should I use an up to date web browser?