Werder could barely have hoped for a better Saturday night. After losing 4-1 to Hertha Berlin in the opening game of the season, the Green-Whites got their own back with the exact same scoreline in the capital. Davie Selke, who scored a thunderous penalty before later leaving the field with a dead leg, was full of praise for his teammates: “There were a heck of a lot of top performances out there today.”

WERDER.DE rounds up all the reaction after the big win over Hertha. 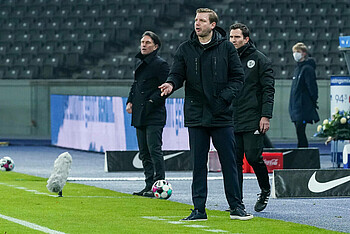 Florian Kohfeldt was happy with his team’s cohesion (photo: nordphoto).

Florian Kohfeldt: “We knew that Hertha could play good football and have real quality in their ranks. It was a tough game; Hertha never gave up and kept on probing. Despite having a young team out, we played with a lot of cleverness and scored some great goal, which is very pleasing, as is the overall performance.”

Davie Selke: “I’m really proud of the boys. There were a heck of a lot of top performances out there. I couldn’t pick anyone out – we played as a team. It was a really important game for us, so to win it in the way we did is amazing. It was a short day at the office for me unfortunately. I would have like to have been out there for longer.”

Josh Sargent: “The team did really well. We made a really good start through Davie and Ömer’s goals. Our attacking style was the right approach, which you can see in the scoreline. It’s three huge points and hopefully we can kick on.”

Maximilian Eggestein: I actually don’t think we were as good as we were against Gladbach in midweek in terms of how we moved the ball around. However, we took our chances today and were much more effective, which is far more important.”

Romano Schmid: “A win is always worth its weight in gold. We had one eye on the other results this weekend and knew that it was important to pick up three points. We start well, but when Davie went off we lost our composure in our pressing game and that allowed Hertha to grow into the game. Nevertheless, we deserved to take our lead into the break. We made life really difficult for our opponents in the second half.”

The strikers on their goals:

Davie Selke: "The scream came across worse than it meant to be. It definitely wasn’t meant to be directed towards Hertha – I always felt god there. I was just so happy to have scored the penalty and I knew how important it was."

Josh Sargent: "I am exhausted, but happy. It was a little hectic when I came on, I wasn’t expecting it so early. I’m really happy that I scored today."

On the upcoming matches: 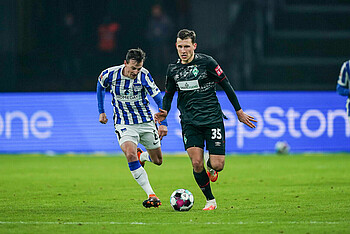 Maximilian Eggestein: "We’re playing better football again. You saw that midweek against Gladbach as well. I think we’re getting back to where we want to be. We came in from a tough season and things aren’t always so smooth from the off. We had to work on things slowly. Right now, it’s all about picking up points."

Romano Schmid: "We’re taking things one game at a time, so the table is irrelevant right now. I want to win every game. If we do our job, will we’ll move up a few more places."

Florian Kohfeldt: "It’s a very valuable win, because we’ve always keep a stable distance. We’ll have that again after this matchday. But we have to be warned that we can’t produce that week in week out. We’ve got too many injuries, unfortunately. Now we have another really period. I hope that we get the established Bundesliga quality back soon. That’s not a criticism towards the young players, but they won’t be play like that for 20 games straight."

Werder come from behind to beat Frankfurt!

25.02.2021 / First Team
Your web browser ist outdated.
The web browser you are using is no longer supported.
Please download one of these free and up to date browsers.
Why should I use an up to date web browser?