Ahead of the upcoming international break, SV Werder Bremen face a shorter week of training than normal in the run up to Friday’s home clash with 1. FC Köln. On Tuesday, the first training session of three this week took place as the Green-Whites prepare to return to the wohninvest WESERSTADION for a home game under the floodlights. As usual, director of football and scouting Clemens Fritz was on hand at Osterdeich to give his thoughts to WERDER.DE on a variety of topics in and around the club. 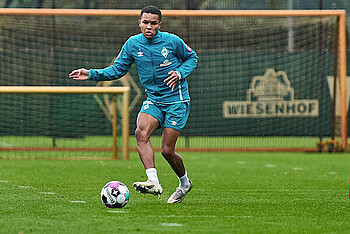 Felix Agu will be able to join up with the team again on Thursday (photo: nordphoto).

…the squad: “Patrick Erras is back to training as normal and Felix Agu is scheduled to train with the team again from Thursday. Davie Selke is also back in Bremen and we’re going to keep monitoring him and Ludwig Augustinsson in the run up to Friday to see whether they can be involved. Niclas Füllkrug won’t be fit for the game unfortunately. He’s making good progress with his injury but we’ll have to wait for a little longer before he’s fully match fit.”

…Felix Agu: “Felix is doing well in isolation and we’ve given him a fitness program so that he can stay fit during this period. We’re looking forward to having him back with the team soon. The timing of this is unfortunate because he was training really well before his positive test and was pushing for a place in the team. We’re hoping he can pick up where he left off and keeping developing as a footballer.”

…the shorter week of training: “We’ve got one day less than normal because we’re playing on the Friday, but that won’t have a massive impact on us. It’s just a game like any other for us. We’re just looking forward to the match under the floodlights on a Friday evening!”

…coronavirus measures: “We know the measures inside and out now after a few weeks and we’re carrying them all out around the club. We’re wearing proper masks at all times in the changing rooms and during treatments and massages. Everyone in the team and in the backroom staff is taking it very seriously and sticking to the rules. We’ve got nothing but praise for the way everything has been handled by the players and staff.”

…1. FC Köln: “They will be turning up to win, there’s no doubt about that. I think we’ll be up against a very good Köln side who will give it everything they’ve got. As a team, they’re in a bit of a process of transition but they played very well against Bayern and only narrowly lost which I don’t think many people were expecting to happen. We should take that as a warning that we need to be at our best on Friday.”

…the upcoming international break: “Getting three points before an international break is always incredibly good for the team. It gives the self-confidence an enormous boost and improves the feeling and the atmosphere around the team and the club as a whole. Then you can relax on the days when there are no matches. It would be ideal for us to get three points from the game on Friday, but they’ll be feeling the same. It won’t be an easy game, that’s for sure.”

…potential friendlies during the break: “We have something in the pipeline but nothing has been finalised yet. At the moment it’s not easy to find an opponent for a friendly as lots of teams aren’t allowed to play at all, but we’re still trying our best.”

…the U23s: “It’s a difficult situation and it’s up to the local health authorities whether they’ll be allowed to train or not. The U23s are very important; if we were to have more cases in the first team, we’d have to bring in players from there to replace regular starters so that means it’s all the more important that they are allowed to continue training.”