Look to the future

Clemens Fritz in the mixed zone

The excitement of the transfer window is slowly subsiding, the international break is over and the Bundesliga is almost back. Clemens Fritz, head of scouting and professional football at SV Werder, now wants to look to the future and focus on the coming challenges in the 2020/21 season. He spoke to the media on Tuesday as training got underway for another week.

... the strict Coronavirus measures: “It’s a big challenge for all of us, for Werder Bremen and all clubs. The players underwent testing yesterday and all the results were negative. We obviously hope that it stays that way.”

... Milot Rashica: “We were in contact all the time, even during the period of speculation. He’s really impressed me. We now hope that he can bring his best form back to the pitch as soon as possible. He’s worth an incredible amount and he’s an extremely important player for us.”

... the current season: “We’ve only played three matches and we obviously know that we can’t sit back and relax now with the six points. We have difficult games coming up in the next few weeks, but we should look forward to what’s coming and look to the future positively.” 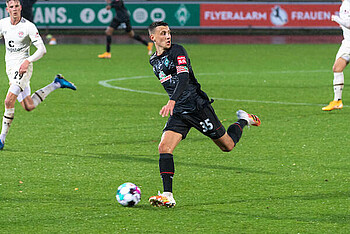 ... changes in midfield: “We have lots of players who we want to keep developing. There are some boys in midfield who need some time invested in them too. Nonetheless, we’re confident that they’ll be able to close the gaps in midfield.”

... responsibility for Maxi Eggestein: “I think that Maxi is the sort of person who knows his role perfectly. We shouldn’t make the mistake of putting it all on him to do. He needs support, but we obviously expect him to keep pushing forwards and to relish the responsibility. We absolutely trust him to do that as a sportsman and person.”

... young players at Werder: “We have a young squad with players who are developing, and we trust them to grow into their roles. The important thing is that we share the weight of responsibility across lots of shoulders. Everyone needs to take responsibility for the team. And it doesn’t matter how old you are or how many games you’ve played in the Bundesliga. That gives us good competition for places which helps our team. Florian then has to take a look in training, over the long and short term, at who is knocking on the door to be selected.”

... SC Freiburg: “Freiburg are an unpleasant opponent and it’s hard playing against them. They have a good squad and a top head coach who always gets the most out of them. The games are usually tight affairs where you have to give everything to be successful. Nonetheless, I have good memories of playing Freiburg.”