Marco Friedl on his personal ambitions, the back three, and the game against Köln

Marco Friedl is already a fixture in the starting line-up for SV Werder Bremen, even as a young player making his way in the Bundesliga. The young Austrian seemingly has an affinity with the number 22; Friedl is 22 years old and has started 22 out of a possible 22 matches this season. Friedl has made huge strides this season, but the man himself still isn’t satisfied. “I want to iron out the inconsistencies in my performances and I’m working to play at a more stable level.”

Marco Friedl is already taking on plenty of responsibility in a green shirt, so he was quick to put Ömer Toprak’s comments last week into perspective. Toprak had taken full responsibility for the goals conceded against Hoffenheim, but Friedl disagrees. “That speaks for what kind of man Ömer is, what a leader he is,” said Friedl. “I don’t think he had to do that, though. The goals were just a collection of errors. We were all involved in that.”

More responsibility in the backline 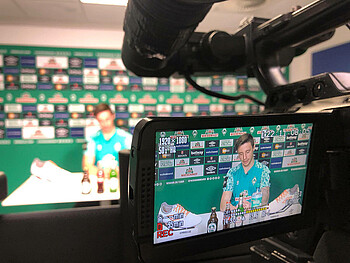 Although the Austria international often featured at left-back last season, he has since been used in the centre of defence. The reason for that is Werder’s preferred system this season, with Florian Kohfeldt opting for a back three more often than not. “In a back three you have situations now and then where you have to play quite wide. You are even more involved with trying to open play up,” said Friedl, who looks right at home in the new shape. The position is allowing him to refine one or two areas of his game: “I’m working on my attacking play so that I can take on more and more responsibility for our build-up.”

Heading into the DFB-Pokal quarter-final, Marco Friedl wanted to use the momentum from the good defensive performance in the win over Eintracht Frankfurt. But the decision to postpone the game following an outbreak of coronavirus in the Regensburg camp was “the right call” according to Friedl. Werder’s number 32 is instead looking forward to the upcoming Bundesliga games against Köln and Bielefeld. “Obviously we know how important these two games are. We can reap the reward for our hard work by picking up points in both. The Frankfurt game has given us a lot of confidence and we will take that into our next few games. We are really excited because there is a lot at stake.”

“We have to continue to work hard and give it ev ...

Relegation battle is a psychological test

03.05.2021 / First Team
Your web browser ist outdated.
The web browser you are using is no longer supported.
Please download one of these free and up to date browsers.
Why should I use an up to date web browser?