“No drama and no celebrations”

Views on the 0-0 draw against SC Freiburg

It was a muted atmosphere following the final whistle at the wohninvest WESERSTADION on Saturday afternoon, as SV Werder drew 0-0 with SC Freiburg. “The result is fine,” said head coach Florian Kohfeldt, but the boss was not satisfied with the Green-Whites’ performance. “It wasn’t a big step forward. We have to maintain our concentration.” 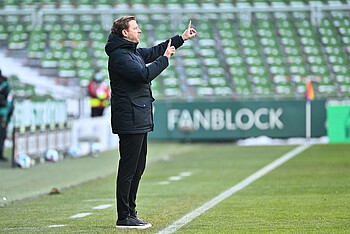 Florian Kohfeldt was very active on the touchline (nordphoto).

Ömer Toprak: “I think that both teams tried to play good football and did so for periods of the game, but then were unable to carry it on in the penalty area. There weren't many chances to score for either team, so I think it is a fair draw. It's important to remember that they have picked up a lot of points from their last few games. They are in good form and made things difficult for us. We knew beforehand that they are a great team. I think we managed to maintain our focus well for the full 90 minutes.”

Kevin Möhwald: “It’s a point that we will have to live with. It was a really even game. Things didn’t look too bad I don’t think, but it wasn’t an entertaining match with chances at both ends. We have to blame ourselves for that. We were OK, especially in the first half, but we were just rushing things a bit. In the end 0-0 is a fair result.”

Maximilian Eggestein: “We had definitely hoped for more, but when you look at how the match went then I think the draw is fair. We defended well but we should have created more opportunities going forward. We kept things tight and in the first half we got forward well too. In the second half we weren’t doing that as well and we didn’t have any good opportunities to press. Our play was too slow as well.”

Davie Selke: “From our point of view they are a tricky opponent who are really compact and hard to play against. Their lads are always really well organised by the coach. Obviously we would have liked to win but we will take the point with us.”

Milot Rashica: “It’s good that we were able to create a few chances. We played out from the back much better. You can already see from recent games that we are making steps in the right direction. If we keep doing that then we will get more from our next few games. I think that we are all playing well together and fighting well as a team.”

Florian Kohfeldt: “We played against one of the league’s most in-form teams today. I thought we were better in the first half and Freiburg were on top in the second period. All in all, then, the draw was fair. The result is perfectly fine and is a point gained for us against such a consistent team. Nobody moved things up a gear so that you could see the teams at their best. There wasn’t anything that ignited the match. A lot of it was played at a slow tempo, but at the end of the first half you saw a bit of pace injected and that did us some good. We had shots and chances, one of which was a huge opportunity for Milos.”

On how the season is going: 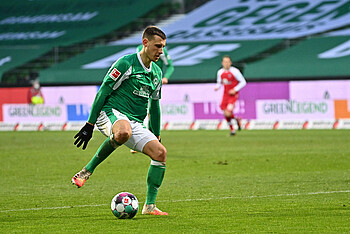 Maximilian Eggestein and SVW are taking it one step at a time (nordphoto).

Maximilian Eggestein: “We’ve always been taking things step-by-step this season. We are doing that well, but we obviously would have liked to win at home against Freiburg. We didn’t manage that, but you have to say that Freiburg are in great form right now. We knew the task ahead of us and we wanted to keep the game tight.”

Florian Kohfeldt: “We’ve kept going on a steady path. It’s baby steps to start off, you saw that today. We didn’t try booting so many long balls, we tried to be braver playing it out from the back. We matched the team in 8th every step of the way and that’s a good sign for us. It wasn’t any huge step forwards, things haven’t really changed. We have to keep on our toes, but today’s performance was OK.”

Florian Kohfeldt: “It’s nice that the whole squad was together just before the match. Leonardo Bittencourt didn’t play today because I thought that Romano Schmid was a better fit for this game. Niklas Moisander had a quiet game and defended everything well. It’s good to have options.”