“I flew under the radar a bit during my youth career!”

The interview of the month with Felix Agu

After one year in the third tier and one year with VfL Osnabrück in the Bundesliga, Felix Agu left his hometown for Bremen last summer. In the first part of the WERDER.DE interview of the month, the 21-year-old full-back sat down to discuss celebrations in Marseille, training his left foot, and his admiration for Jay-Jay Okocha.

WERDER.DE: Felix, how have your first eight months at SV Werder been?

Felix Agu: “It’s the first time that I’ve joined a new club since I was eleven, so that in itself was a new experience. In addition to that, the Bundesliga is something completely different from anything I’ve experienced before. Everything is so much bigger at Werder than it was at Osnabrück. The training ground was on one side of town and the stadium was on the other there, but here we’re always at Osterdeich and the dressing room for training is the same as the one on matchday. That impressed me a lot. On the pitch, I was suddenly playing with players like Ömer Toprak and others who have played in the Champions League. I’ve been made to feel very much at home and I’ve also managed to pick up minutes on the pitch as well. So overall, I’m very pleased and really proud to have made it this far.”

A big step forward at Osterdeich 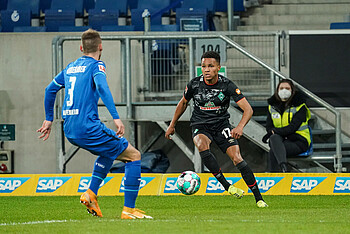 Felix Agu is picking up Bundesliga experience at left-back (nordphoto).

WERDER.DE: You decided to join Werder at a very early stage, even before it was certain that you’d be playing Bundesliga football in Bremen…

Felix Agu: “I was firmly convinced that things would work out and we’d stay up, although it was a bit closer than expected in the end! (laughs) It’s always been clear to me that this is a good place for me to be. Even if the club had suffered relegation, we would have been one of the top teams in the Bundesliga 2. The environment and the opportunities here are just so much greater than they were in Osnabrück. Being so close to my hometown did make the decision a little easier though.”

WERDER.DE: Were you following the decisive second leg of the relegation play-off?

Felix Agu: “I was on holiday in Nice at the time and we were going to pick up a friend from the airport in Marseille. I was watching the game on my phone in a restaurant and cheering the team on. After the final whistle, there was a lot of cheering and celebrating and even the cooks joined in!” (laughs)

WERDER.DE: You made the leap into professional football at VfL Osnabrück, but what new things have you learned here at Werder?

Felix Agu: “I’ve realised that football is about much more than the sport here; it’s also a huge business. Everything is about performance and being able to deliver. It all counts on performing at the weekend. That’s what everything is geared towards. That was also the case to a certain extent in the second and third tier, but you feel it so much more acutely here.”

WERDER.DE: Would you say that the requirements for your position are different here compared to at Osnabrück?

Felix Agu: “Not really. Due to our three-man backline, the full-backs are heavily involved in attacks and it was the same at Osnabrück. I was expected to make a lot of forward runs and use my speed there too.”

I just always tried to keep at it, keep learning, and to fight my way through.

WERDER.DE: Do you prefer playing on the left or the right?

Felix Agu: “As a right-footer, I’d have to say the right. (laughs) But I feel at home on both sides and I’ve played on the left a lot more often over the last few years.”

WERDER.DE: How did that come about?

Felix Agu: “Our normal left-back got injured and the coaches felt that it would be a good idea to put me in there. I did well and they continued to play me there afterwards. I trained my left foot a lot so I had more options on the ball. As a right-footer I used to cut inside to the middle of the pitch a lot, but as my weaker foot got better and better, I was able to take it round the outside as well to make things harder for my opponents. After promotion to the second division, I did actually play on the right for a few games but then switched back to the left. And then here at Werder I’ve been used on the left again due to Ludde’s injury.”

WERDER.DE: How did you initially end up playing for Osnabrücker SC as a child?

Felix Agu: “I grew in the Wüste, which is a district of Osnabrück. The OSC training was only a five-minute walk from home so I played there a lot. When I 10, I made the switch to VfL together with two friends. That was the youngest age group they had at the time.”

WERDER.DE: Who was your footballing hero as a child?

Felix Agu: “I think that Jay-Jay Okocha really helped to change and shape football here in Germany with his incredible skill and dribbling. I really enjoyed watching him, and he is also Nigerian like my father so I felt a certain connection to him. He was something of an idol for me. Later on, I also looked up to David Alaba.”

"I became a lot more ambitious and realised that actually, I could make it in professional football." 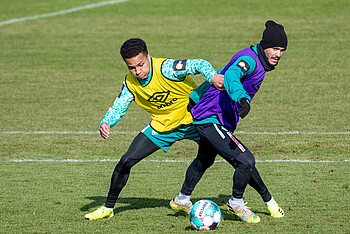 Felix Agu learnt to fight through at VfL Osnabrück (nordphoto).

WERDER.DE: Other than VfL Osnabrück, which clubs did you support?

Felix Agu: “I watched Manchester United the most, but we also had a lot of Werder games on at home because my father is a big Werder fan. He always said that when he first arrived in Germany, he liked their name and he’s supported them ever since!” (laughs)

WERDER.DE: After playing for the VfL youth teams, when did you first start to push to get into the first team?

Felix Agu: “It was always my dream to become a professional at Osnabrück. At first I didn’t really believe it would work out as I wasn’t necessarily that much better than the others in my age group. I just always tried to keep at it, keep learning, and to fight my way through. Physically, I was a late bloomer but I made some gains in the U19s. When I saw Daniel Thioune make the leap to training with the first team, I began to see that my path could also lead that way and that’s how it’s happened.”

WERDER.DE: So the drive to turn professional wasn’t what drove you to play football as a youngster?

Felix Agu: “It was just a hobby that I loved doing. Playing for VfL as a youngster was a lot different to playing for the likes of Werder and it always felt as if professional football was a long way away. But I enjoyed it a lot so I just kept playing. I was with my friends and was always trying to improve. It wasn’t until the U17s that I became a lot more ambitious and realised that actually, I could make it in professional football.”

WERDER.DE: Did you never attempt to join the academy of a Bundesliga side?

Felix Agu: “It might have been possible with the U19s but it never crossed my mind before then. I think I flew under the radar a bit during my youth career. (laughs) It’s sometimes better for your development to go your own way in the quieter surroundings of a smaller club instead of having too much pressure to perform as a child. For me at least, that was the perfect environment to develop.”

“I’ll keep giving it everything I’ve got”

Optimism for Füllkrug, Augustinsson ruled out of ...

13.04.2021 / First Team
Your web browser ist outdated.
The web browser you are using is no longer supported.
Please download one of these free and up to date browsers.
Why should I use an up to date web browser?