"Cool heads and a lot of emotion"

Preview of the relegation playoff second leg against Hoffenheim

The first leg has been analysed and unpacked, and now the focus is on “the last Final of the season,” as Florian Kohfeldt’s man take on 1. FC Heidenheim in the relegation playoff second leg on Monday, 06.07.2020 at 20:30 CEST. Because everyone knows that after the match against FCH, “the season will finally be over.” And for Werder’s coach, there’s one thing that’s certain: “We want to end a bad season on a positive note.” It will be of the utmost important that there’s to be a balance between a patient style of play and a passionate battle. “We need to keep cool heads, but still have the emotions that are required for a game like this.”

The squad: Niklas Moisander and Kevin Vogt swap roles for the second leg, with the captain suspended after a red card in the first leg, while Vogt returns from a suspension. Also ready for the game is Sebastian Langkamp. Head coach Florian Kohfeldt stated that Basti, Ömer Toprak, or Marco Friedl will take Moisander’s position at left-centre-back. Essentially, the head coach has at his disposal all the players who were last available, and who are able to play.

The coach: "We needed more patience on Thursday to play how we wanted to play,” said Florian Kohfeldt on Sunday’s press conference, looking back at the first leg against 1. FC Heidenheim 1846. After “a factual analysis of the match”, he also faced the question as to whether it is better to “tackle against Heidenheim harder to disorganise the side”. Ultimately, it does not matter which tactical approach is taken. At the end of the day it will be "a question of nerves”, Kohfeldt states, but also sees his team as being well-equipped. “I don’t think that we’re going to let nerves get to us, because we have a lot of experienced players in our ranks, who are familiar with these high-pressure situations.”

The last game: While the players and managers both noted the 0-0 draw against 1. FC Heidenheim 1846 as a success, disappointment was etched on the faces of the Bremen players’ faces at full-time. This was not only because of the lack of goals, but as a result of the overall poor performance of the side in a game with few chances. Head coach Florian Kohfeldt didn’t see his plan ahead of the game implemented in terms of style of play, or even tactically. On Monday evening, there will be another chance to implement the tactics and win the match. 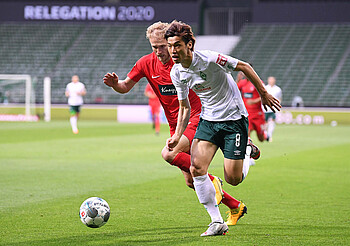 "Attack from the start", will be the Motto for Yuya Osako (Photo: nordphoto).

Werder Bremen’s away game prowess: It’s definitely an advantage for Werder Bremen that they’ve been drawn as the away side for the second leg. The Green-and-Whites picked up 22 of 51 possible away points in the Bundesliga this season, and ranked 8th in the Bundesliga away form table. However, Heidenheim are considered to be a real force at home: Frank Schmidt’s team are unbeaten in their last 12 games at home. The time is now for this unbeaten run to come to an end.

Precious away goals: Those Werder fans of a somewhat older disposition should still remember it well from our European past successes, but away goals are worth their weight in gold. The fact that Bremen didn’t concede a goal in the first leg can therefore be considered a small victory. Because of the away goals rule, FCH will have to outscore Werder Bremen when they meet on Monday. Even in the case of a 1-1 draw, Kohfeldt’s men would still win the tie.

The refereeing team: Due to the ongoing pandemic, the German Football League (DFB) will only announce the refereeing team on the matchday after a negative-testing coronavirus test of the team from the previous day.

“Total effort and commitment” despite the heat

Ready to go after an “important” year

"I want to work and fight hard"

05.08.2020 / First Team
Your web browser ist outdated.
The web browser you are using is no longer supported.
Please download one of these free and up to date browsers.
Why should I use an up to date web browser?