Looking ahead to the first leg against Heidenheim

"Mentality and Intensity" are what Yuya Osako & Co. will need to bring to the pitch against Heidenheim (Photo: nordphoto).
preliminary report
Wednesday, 01.07.2020 / 13:55

The first of two more chances for Werder Bremen is tomorrow. On Thursday, 02.07.2020 at 20:30 CEST, Werder Bremen will take on 1. FC Heidenheim 1846 at the wohninvest WESERSTADION in the relegation play-off match. A home win should be enough to see Werder Bremen through to staying in the Bundesliga. “Mentality will be decisive and how we handle the intensity of the pressure,” said Werder head coach Florian Kohfeldt ahead of the match. And he can clearly see the mental strength of his team. “We’ve invested so much, and it took so much energy to get to this point. We want to finish it all off.”

The squad: Florian Kohfeldt announced happily that “Everyone is available”. What this means in practice is that long-term-injured players such as Kevin Möhwald and Nuri Sahin are out, while all other squad players should be available on Thursday evening. However, Kevin Vogt is banned after accumulating a fifth yellow card against Cologne. The defensive all-rounder may still be available for the second leg. 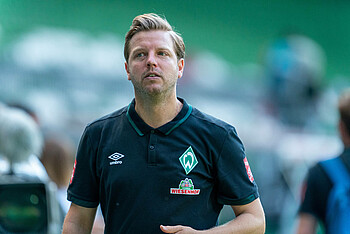 Florian Kohfeldt says the pressure is high on his side (Photo: nordphoto).

The head coach ahead of the game: “These will be two very challenging games. We need to be very vigilant,” stressed Werder head coach Florian Kohfeldt ahead of the first leg of his side’s Bundesliga relegation playoff in the club’s history. “Nobody is underestimating anyone here.” 1. FC Heidenheim come to Bremen as third in the 2. Bundesliga, and as Kohfeldt says, they “have weapons that can hurt us”. Kohfeldt believes that the outstanding characteristics of Frank Schmidt’s side include their way of playing out of possession, as well as their distribution, combined with their strength in the tackle. The 37-year-old coach also notes FCH’s strength on set-pieces. As for who is favoured in the matchup, Kohfeldt states, “Basically, I’m happy being the favourite. It implies that you’ve got a lot of things under control.” But the title also comes with negative implications. “The tension is really high. It’s the same pressure we’ve felt in the last weeks, if not even higher than that.”

The last match: “I don’t think there’s any way we can repeat that result,” said Florian Kohfeldt, remembering Werder’s 4-1 second-round DFB-Pokal home win against Heidenhem in October. A repeat of that result would be desirable though, because SVW managed to lead with four goals from Milot Rashica, Leonardo Bittencourt, Davy Klaassen and Marco Friedl after only 41 minutes. Even though the Werder coach has recently looked at this game again, he expects a match that’s very different from October’s affair. “You have to take a more strategic approach to a game like this. Unlike the cup, there’s now two legs, which both count.”

The return of the away kit? 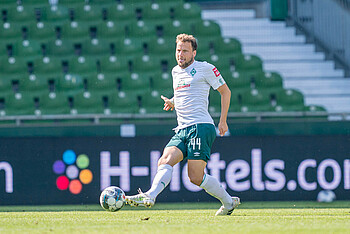 Philipp Bargfrede and Co. have played better in the away kit all season (Photo: nordphoto).

Another kit change? A lot of Werder fans may have noticed that Werder played in the white-green-white away kit on Matchday 34 at home against Cologne. It’s unlikely that it was just a mix-up from kitman Boban Aleric. After all, Werder have been much more successful this season in the white away kit than the home shirt. Therefore, there’s a good chance that the boys will be in white-green-white on Thursday rather than just green.

Keep calm: While Kevin Vogt is suspended for the first leg because of an accumulation of yellow cards, Marco Friedl could suffer the same fate for the second leg against Heidenheim. The full-back is currently on nine yellow cards. If he gets another caution, he will miss the second leg. In the FCH squad, the same will happen to midfielder Konstantin Kerschbaumer. In the first leg, however, Werder’s opponents have no suspended players.

The referee: Due to the ongoing pandemic, the German Football League (DFB) will only announce the refereeing team on the matchday after a negative-testing coronavirus test of the team from the previous day.

“Total effort and commitment” despite the heat

Ready to go after an “important” year

"I want to work and fight hard"

05.08.2020 / First Team
Your web browser ist outdated.
The web browser you are using is no longer supported.
Please download one of these free and up to date browsers.
Why should I use an up to date web browser?