After serving a yellow-card suspension, Davy Klaassen will be back in the squad this weekend (Photo: nordphoto).
preliminary report
Friday, 22.05.2020 / 14:20

‘Now more than ever’ is Werder’s motto ahead of this weekend’s away game against SC Freiburg. After restarting their Bundesliga campaign on the wrong foot against Leverkusen last Monday, the Green-Whites head to Breisgau in hot pursuit of points. In line with the conditions implemented to permit the Bundesliga to resume play, the game at the Schwarzwald-Stadion will take place behind closed doors on Saturday, 23.05.2020. A difficult situation to be sure, but one that Werder will be looking to put aside as they look to escape their precarious spot in the table. The team’s full focus is on one thing and one thing only: bringing home three points.

The squad: “The majority of the lads weathered the game well,” was a spot of positive news that head coach Florian Kohfeldt could draw from the match against Leverkusen. After serving a yellow-card suspension, Davy Klaassen will be available to feature this weekend, with Kohfeldt listing his mentality as one of the reasons why he is a key player for the team. The midfield motor can almost certainly expect to find himself in the starting line-up on Saturday. However, the same cannot be said of Ludwig Augustinsson. “Ludwig will not be able to feature against Freiburg. After our training sessions this week, he didn’t feel as though he was completely ready yet. We hope that he will be able to feature either against Gladbach or against Schalke at the latest,” Kohfeldt said about the Swedish left-back, who has been struggling with a muscle problem in his thigh. Kohfeldt does not see a need to rotate his squad ahead of the match against Freiburg, with an eye on the heightened number of fixtures over the upcoming weeks. “We had enough time between the two games. There has been no consideration given yet to doing this, from an athletic perspective. Tuesday and next Saturday will be a different story for us.”

Kohfeldt: “We need to get going” 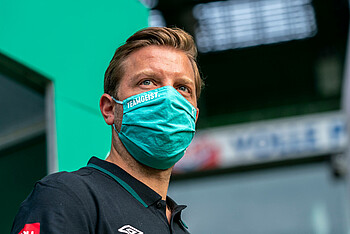 Florian Kohfeldt is looking to return home with three points in hand on Saturday (Photo: nordphoto).

The head coach on the game: “Who we’re playing against cannot be an issue,” said Kohfeldt, when asked about his side’s upcoming opponents. The head coach is well aware that Freiburg, who currently sit in seventh after holding title candidates RB Leipzig to a 1-1 draw last weekend, are the favourites heading into the match. However, he is paying little mind to this. “Freiburg are in form and are playing well this season,” he said, adding that if “we focus on the details it’s not out of the question to win in Freiburg. We need to deliver a strong team performance.” The 37-year-old was adamant when saying “We cannot ask ourselves ‘when and where?’ We need to get going, we don’t have time to waste!”

The last meeting: Werder will not have fond memories of facing Freiburg earlier this season. Goals from Milot Rashica and Theodor Gebre Selassie put them on the path to victory, but Freiburg were able to mount a comeback. Late in the third minute of added time, it was former Bremen man Nils Petersen who would score the equaliser to make it 2-2. On Saturday, Werder will be looking to take those three points that eluded them in November. 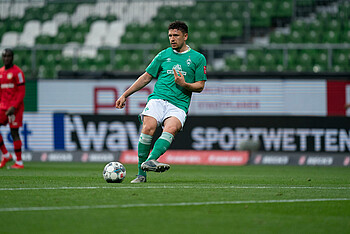 Milos Veljkovic will be looking to avoid going into the book this weekend (Photo: nordphoto).

On the verge of suspension: While Davy Klaassen makes his return to the squad after serving a yellow-card suspension, teammates Milos Veljkovic and Kevin Vogt are in danger of picking up their fifth bookings. Freiburg’s Lucas Höler is also sitting on four yellow cards heading into the match.

Officials: The Deutsche Fußball-Bund (DFB) will await the results of a negative Covid-19 test on Friday, before announcing the team tasked with officiating Saturday’s game.

29.05.2020 / First Team
Your web browser ist outdated.
The web browser you are using is no longer supported.
Please download one of these free and up to date browsers.
Why should I use an up to date web browser?