The reaction to the first leg against Heidenheim

Werder will be disappointed after their goalless first leg draw against 1. FC Heidenheim 1846. It was a well-fought game between the two sides, in which both teams were desperate for the win. “We put in a poor performance,” said Florian Kohfeldt after the final whistle. However, Werder have the chance to make amends and fight for their Bundesliga survival in Heidenheim on Monday. One advantage for the Green-Whites is that they managed to keep a clean sheet, preventing FCH from scoring an away goal. “It’s all still up in the air we have a real cup final ahead of us,” said Maximilian Eggestein. 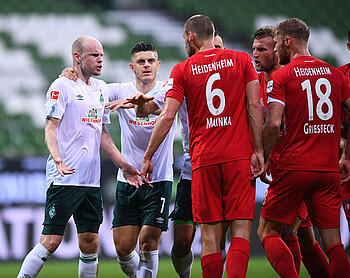 It was an emotional, hard-fought game between the two sides (Photo: nordphoto).

Niclas Füllkrug: “It was a difficult game, as expected. It’s clear that they would defend with their heart and soul. I think that we only played well in phases and that we struggled to find a way through. We’re taking a 0-0 draw to Heidenheim, which is okay. We controlled the possession in the first half, but we struggled in the second half. We started the second half well and Heidenheim struggled to get out of the blocks. But then unfortunately we lost control of the game.”

Maximilian Eggestein: “We have to be honest with ourselves, we didn’t play well today. So we have to take the 0-0 and we urgently need to improve in the second leg. We didn’t set up well in the first half and it felt as if we were playing in two lines so we couldn’t get any good combination play going. Heidenheim also played well and stuck with their man. We knew they would do that, but it’s not always easy. Nevertheless, we have to have better movement in the second leg and move the ball around better.”

Florian Kohfeldt: “I won’t beat around the bush; it was a really bad game from us. We didn’t manage to do what we spoke about before the game. Overall, there were a limited number of chances. We didn’t do enough, there’s no question. We didn’t play how we wanted to from the first to last minute. We all failed to show out on the pitch what we wanted to today. We put in a poor performance.”

On the second leg: 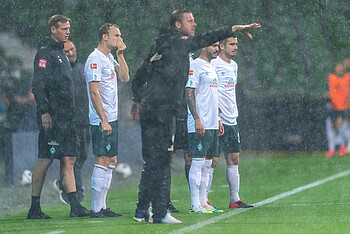 Florian Kohfeldt was disappointed with his team's performance (Photo: nordphoto).

Niclas Füllkrug: “Heidenheim didn’t score an away goal. We are stronger away from home and will try to score there, so the situation is still okay. Of course we will miss Nikls Moisander, but we have good players at the back. I’m not worried.”

Maximilian Eggestein: “If we want to take positives away from today, it’s that we didn’t concede a goal. We have to improve everything else. It’s all still up in the air, we have a real cup final ahead of us.”

Florian Kohfeldt: “It’s 0-0 at half time. They didn’t score an away goal. We have to make sure that we score in Heidenheim, then the situation will look differently for us.”

“Courage and aggression” against Schalke

Rashica not available to face Schalke

22.09.2020 / First Team
Your web browser ist outdated.
The web browser you are using is no longer supported.
Please download one of these free and up to date browsers.
Why should I use an up to date web browser?