Mistakes made and targets missed

Baumann: Not hiding when times get tough

The 2019/20 season was the was the worst season in Werder's history. Accordingly, it deserved to undergo a thorough critical analysis. “It was a very open and critical analysis,” said Klaus Filbry, CEO of SV Werder. Over the past days, the club's supervisory board, managing committee and steering committee have completed a thorough analysis of what went wrong across various areas. On Friday, Marco Bode, Klaus Filbry, Frank Baumann, Dr. Hubertus Hess-Grunewald and Florian Kohfeldt presented their findings at a lengthy joint press conference.

The focus was primarily on Werder’s sporting performance as well as the challenging financial situation, brought on by the Coronavirus pandemic. As CEO of the club, Klaus Filbry made it clear that the responsibility for failing to meet the season’s targets lies with every member of the club. “We absolutely failed to meet our targets and made mistakes along the way,” said Frank Baumann. “As sporting director I take overall responsibility for the season, both internally and externally. But, those who know me know that I don’t hide away during tough times.” 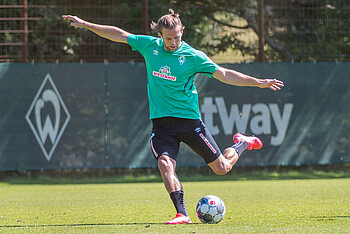 Niclas Füllkrug was out injured for much of the season (Photo: nordphoto).

Together with head coach Florian Kohfeldt, he explained in detail the reasons behind the team’s “historically bad” season. Analysing the various departments at the club provided a wealth of data, from athletic parameters to statistics, injuries and match data. “It’s clear that the injuries were the main factor that weakened the team for much of the season and well into the Rückrunde,” Baumann said. Players missed a total of 2,000 days due to injuries this season - nearly three times as many days compared to the average across the rest of the league (742 days). In particular, the 905 days players missed across the Hinrunde - largely with muscular issues due to a lack of load management - had a significant impact. Baumann quoted statistics from various studies that have proven that a team loses an average of a point for every 137 days of injuries. A team will drop one place in the table for every 271 days injured. At times, Werder had 12 regular starters out injured. This resulted in a vicious cycle: the high number of injuries significantly reduced the quality of training, the intra-squad competition, the team’s ability to make tactical changes and the option of “adding personnel” during matches. According to Baumann, the team were only in a position to be able to compete in terms of squad depth and athleticism after the enforced break.

Baumann was self-critical when listing the mistakes that were made this season. It’s true that action was taken early on in order to ease Werder’s injury woes, and that positive change was achieved later through tough personnel decisions, but overall, the club “did not act quickly enough” and lacked “conviction.” In terms of transfers, “very few” of the ideas worked out. Baumann also took the players to task, saying: “Of course, they played a part in this.” In addition to a lack of awareness off set-pieces, “every player fell short of playing to the best of their abilities.” This problem was not down to the coaching staff, as several players who were designated as leaders failed to help the team as expected. 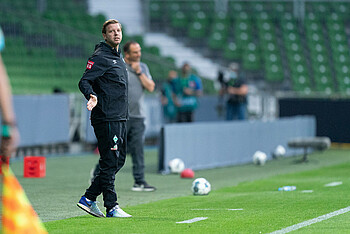 Florian Kohfeldt, who thanked the team for their continued trust in him ahead of the coming season, went on to touch on the following three factor:

1. As head coach, Kohfeldt took responsibility for the training intensity and preparation, and the resulting overload. “I cannot allow that to happen anymore. I was driven by the ambition to improve our athletic condition and change our game. I thought the team was ready for that, it wasn't."

2. The staff and support staff: Prior to the 2019/20 season, the club attempted to assemble a staff with the greatest possible expertise. “What fell to the wayside was the ability to work as a team,” said Kohfeldt. “Solving the conflicts took time and energy,” he said, adding that, following personnel changes, he noticed “a real team effort on behalf of the staff” in the closing stages of the season. 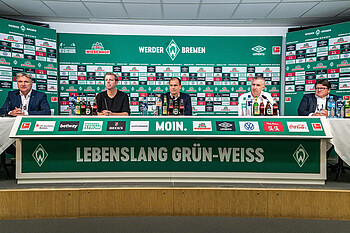 3. For over two-thirds of the season, the team was unable to have the flexibility it had hoped for given the lack of squad depth, which had an impact on the games. “The coach was thus unable to showcase his strengths,” said Baumann.

It was Marco Bode, chairman of the supervisory board, who said that it could not just be “business as usual.” The supervisory board had been a critical companion to the club’s decision-makers across the entire season. “We need to be prepared to learn from our mistakes,” Bode said. He added that he is in support of maintaining consistency across the team’s management and coaching staff. “Those who think there are only two extremes - 'stick on the same path' or 'fire some people' - will be disappointed. We undertook a thorough and critical examination of what went wrong. We are all convinced that we want to continue with the management that we currently have. It’s clear that we must continue to develop, but I’m also convinced that we need to remain true to our basic philosophy.”

Schönfelder faces spell on the sidelines

"Full of pride and gratitude"

Clemens Fritz takes over a newly-created role as ...

02.08.2020 / First Team
Your web browser ist outdated.
The web browser you are using is no longer supported.
Please download one of these free and up to date browsers.
Why should I use an up to date web browser?