A win away at Schalke! SVW have risen to the task in the next step of their relegation battle with a 1-0 win over S04. Leonardo Bittencourt scored the only goal of the game with a beautiful effort after 32 minutes. It was largely a game of two halves in the empty VELTINS-Arena. After a dominant opening period from the Green Whites, David Wagner’s side came out a completely different team in the second half and managed to put pressure on Jiri Pavlenka in the Werder goal. However, Florian Kohfeldt’s side managed to hold on and take all three points back home to Bremen.

Lineup and formation: Florian Kohfeldt made three changes to the side that lined up for the goalless draw against Borussia Mönchengladbach in the week. Yuya Osako and Christian Groß were both dropped to the bench, while Milos Veljkovic missed out through suspension. Sebastian Langkamp, Kevin Vogt and Leonardo Bittencourt were all brought into the side.

Rewarded for our efforts 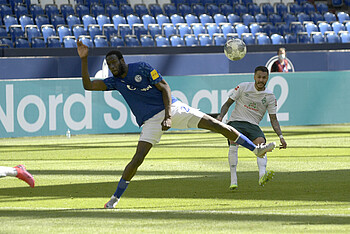 The moment that won the game! (Photo: nordphoto)

The highlights from the first half:

16th minute: Incredible! Werder have controlled 83% of the possession so far! Still looking for that opener…

32nd minute: GOAALLL! 1-0 Werder! They have thoroughly deserved that. Klaassen does well to win the ball back in midfield and gives it to Rashica, who drives forward towards the Schalke penalty area. The Kosovan lays it off for Bittencourt just outside the box, who curls an absolute peach of an effort into the top corner. What a goal!

37th minute: Schalke with their best chance of the game so far. Miranda whips in a good ball from the left hand-side, finding the head of McKennie however he can’t quite direct his effort on target. Phew!

40th minute: Werder are pushing for a second! Bittencourt looks to double his tally but his right-footed effort just misses the near post.

45th minute + 2: Half time in Gelsenkirchen! Werder take a deserved lead into the break. SVW are looking confident at the back and have dominated possession in the opening period. 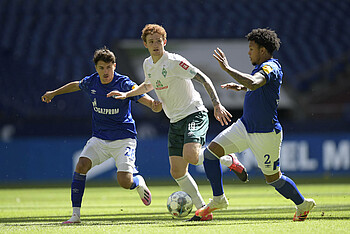 Werder managed to withstand heavy pressure from the hosts in the second half. (Photo: nordphoto)

The highlights from the second half:

46th minute: Werder are forced into a change as goal scorer Leonardo Bittencourt is unable to continue and has to be replaced. On comes Yuya Osako as his replacement. Get well soon, Leo!

50th minute: Schalke have come out a much better side in this second half. Gregoritsch manages to latch onto the cross from Daniel Caligiuri, however his effort flies harmlessly over the bar.

53rd minute: The hosts continue to apply the pressure as Pavlenka is called into action once again. The newly substituted Benito Raman works his way into the penalty area and manages to get a shot away, but Werder’s number one closes down the angle and gets down to make the save!

88th minute: So close! Werder almost grab the insurance goal! Eggestein does magnificently well find an unmarked Osako in the penalty area, but the Japan international tries to find a teammate rather than taking on the shot and Schalke are able to clear.

90th minute + 4: There goes the final whistle! Werder manage to hold onto the win after a difficult second half. That’s now their third consecutive clean sheet! On we go!

Match summary: A difficult but deserved away win! SVW controlled the game in the first half, with Schalke struggling to get a touch of the ball and the visitors went into the break with a deserved lead. Schalke were a much better side in the second half and created a number of chances in the first 15 minutes after the restart. SVW soon managed to get back up to speed and fought for the win up until the final whistle. A courageous performance from Werder gives them a huge boost as they prepare for another crucial game against Eintracht Frankfurt on Wednesday.

The Agony of Choice

01.07.2020 / Business
Your web browser ist outdated.
The web browser you are using is no longer supported.
Please download one of these free and up to date browsers.
Why should I use an up to date web browser?