Werder returned to Bundesliga action after a coronavirus-induced break with a seventh consecutive home defeat. Champions League hopefuls Bayer Leverkusen ran out comfortable 4-1 winners at the in Bremen thanks to goals from Germany international Kai Havertz (28’, 33’), either side of a Theodor Gebre Selassie (30’) equaliser, and two second half goals from Mitchell Weiser (61’) and Kerem Demirbay (78’).

Line-up and formation: Philipp Bargfrede made his first competitive appearance since December 2019 in what was also his 200th Bundesliga outing. The Werder veteran lined up alongside Maximilian Eggestein in central midfield, with Kevin Vogt also providing an additional defensive anchor in front of the defence. Milot Rashica and Leonardo Bittencourt supported Davie Selke in attack. Vice-captain Davy Klaassen was suspended due to picking up five yellow cards, while Ludwig Augustinsson and Claudio Pizarro continue to recover from muscular injuries. Ömer Toprak, Niclas Füllkrug and Kevin Möhwald remain sidelined with long-term injuries. 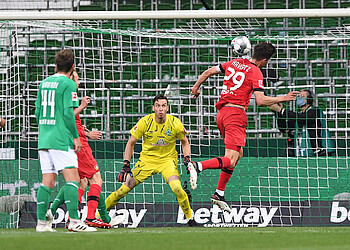 8th min: Diaby gets to the by-line down the left and fizzed the ball low across the six-yard box but Pavlenka held firm.

17th min: Werder’s first chance comes from a corner. Gebre Selassie flicks on Bittencourt’s corner to the back post, where Moisander attacks with the head but is unable to cause danger under pressure.

28th min: Goal, 1-0 to Bayer 04, Kai Havertz. Diaby switches sides, untracked by Friedl, and curly a teasing ball to the back post where Havertz is waiting for a free header past Pavlenka for the opening goal.

30th min: GOOOOOAL, 1-1, Theodor Gebre Selassie. An immediate response from the Green-Whites. Bittencourt whips in a set piece from the left to the six-yard box, where Gebre Selassie was one step ahead of Bender to level the scores at 1-1.

33rd min: Goal, 2-1 to Bayer 04, Kai Havertz. Werder are far too sloppy in defence as nobody picks up Havertz attacking Demirbay’s free kick from deep and the Germany international has another simple header to re-establish Leverkusen’s lead.

39th min: A perfect pass from Veljkovic puts Bittencourt through for a chance to pull Werder level for the second time, but the Werder make was unable to hit the target from the edge of the box.

46th + 1 min: Half time at Osterdeich. With the final action of the half, Bargfrede has a headed chance from Bittencourt’s cross, but was unable to test Leverkusen’s keeper Hradecky.

SVW caught on the break 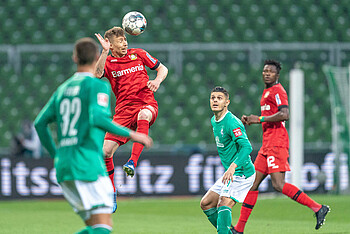 47th minute: Havertz receives a through ball, but Pavlenka comes out to narrow the angle and denies him a shooting chance. Moisander is eventually able to clear, before Eggestein’s shot was blocked from a good position.

61st minute: Goal for Leverkusen. Werder are caught on the break by Leverkusen – Havertz gives it to Diaby, who chips a cross from the byline to Weiser and he heads home a third.

62nd minute: Selke wins possession on the edge of Bayer’s box and plays it to Maximillian Eggestein, but his left-footed shot goes wide. Rashica was in a better position at the back post.

67th minute: Shortly after coming on, Leon Bailey has a good chance but only hits the side-netting.

69th minute: Havertz has a shot with his left, Gebre Selassie deflects it just past the far post.

78th minute: Goal for Leverkusen. The visitors seal the win. Bellarabi cuts inside on the edge of the box, and plays a killer ball through with the outside of his boot to Demirbay, who chips it over the helpless Pavlenka.

93rd minute: Full time in the wohninvest WESERSTADION. The away side pick up all three sides.

Match summary: Werder looked to remain compact and afforded their opponents possession early on. Leverkusen didn’t find much room until Diaby’s burst of pace got past Friedl and Havertz headed home his subsequent cross. Gebre Selassie’s rapid reply was quickly cancelled out by yet another goal from a set piece against Werder, with Havertz on the scoresheet again. As Werder looked to fight back after the break, the visitors broke and Weiser – with another header – made it 3-1. Leverkusen saw the game out confidently and added a fourth and final goal before the end.