SV Werder to face 1. FC Heidenheim 1846 in the relegation play-off

SV Werder Bremen will face 1. FC Heidenheim 1846 in the relegation play-off as they look to secure Bundesliga survival. FCH lost 3-0 on the final day of the Bundesliga 2 season at champions Arminia Bielefeld, but still finished ahead of Hamburger SV, who were beaten 5-1 at home by Sandhausen at the same time.

The first leg will be played on Thursday, 2nd July 2020 (20:30 CEST) in the wohninvest WESERSTADION. The second leg will then take place on Monday, 6th July 2020 in Heidenheim’s Voith-Arena (20:30 CEST). “We will definitely go in as favourites as the Bundesliga side and after the results from the weekend. Nevertheless, we can’t be overconfident as Heidenheim have had a good season,” said Frank Baumann, who added: “We need to focus on ourselves and play like we did against Köln. We can’t give anything away in the two games, so that we can reach our goal of safety.” 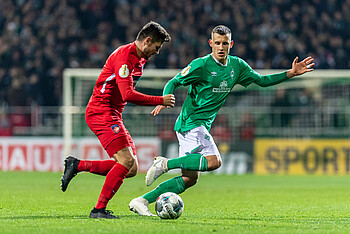 This will be the first relegation play-off in Werder’s club history. Heidenheim have actually already played in the wohninvest WESERSTADION this season. Bremen beat Frank Schmidt’s side 4-1 in the second round of the DFB-Pokal. “We can’t really compare the games,” commented Maximilian Eggestein. “This time, it’s a two-legged affair behind closed doors. Maybe it was slightly strange for Heidenheim to play in front of our own crowd back then.” Head coach Florian Kohfeldt has a similar view: "The cup game came at a completely different stage of the season. We won't be judging our opponents on that game. We will focus on our own performance and this unique situation with these two matches."

“As the Bundesliga side, we are just about favourites, but they can play without any pressure. We have to make sure we stay up,” said Eggestein. Captain Niklas Moisander added: "They will be two hard games. Heidenheim have had a good season, but we're the favourites, and I'm convinced that if we play like we did in Köln in both games we can prevail and stay up."