Jiri Pavlenka on Schalke, Frankfurt and three games without conceding

Three games, zero goals conceded. One person who is particular pleased with this record is Jiri Pavlenka. It’s now the first time the Czech goalkeeper has managed to keep three consecutive clean sheets during his time at the club. Nevertheless, Pavlenka is still Pavlenka.

The number one remained as modest as ever in an interview with WERDER.TV. “If I had to choose between three points and a clean sheet, I would always choose the win,” said the team player, alluding to the goalless draw against Mönchengladbach in the week. 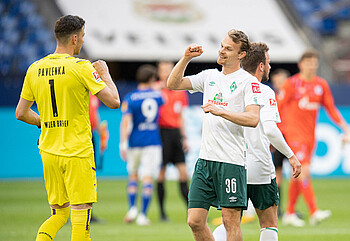 Jiri Pavlenka also played a key role in the win away at SC Freiburg last weekend, making a number of important saves. Niklas Moisander and Co. managed to limited Borussia to an expected goal tally of just 0.53 on Tuesday, with Pavlenka saving Schalke’s only shot on target from Benito Raman at the weekend (53’). Florian Kohfeldt’s side are looking much more solid at the back; the importance of which cannot be understated according to the goalkeeper, “It’s important for us mentally,” said the 28-year-old.

‘Pavlas’ and Co. have the chance to extend their run of clean sheets against Eintracht Frankfurt as soon as Wednesday; something the club haven’t achieved for over ten years. SVW made it five consecutive games without conceding back in October 2009.

However, for Jiri Pavlenka, getting the win is much more important than adding to this run. “We have the chance to keep Frankfurt down in this fight with us,” said the keeper in regards to the table. SVW could close the gap to SGE to just four points, as well as replacing Fortuna Düsseldorf in the playoff position. It would be another small step on the long road to avoiding relegation. Despite going three games without conceding, Pavlenka emphasises, “We know that the situation still isn’t good. We’re still second last.”