"Three goals too easily conceded," underlined Theodor Gebre Selassie in the aftermarth of Werder's 4-1 defeat to Leverkusen on Monday evening.

As always, WERDER.DE brings you all the key quotes below: 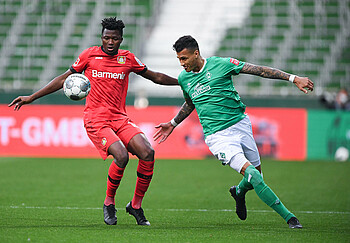 Niklas Moisander: “As expected, it was a tricky game. The first half wasn’t bad. Leverkusen have a lot of quality, but we conceded far too easily. We weren’t good enough. Our attacking play was better in the second half, we had some good moments and should have scored two more. That was the only positive from today.”

Theodor Gebre Selassie: “The turning pointing the game was when we failed to make it 2-2 at one end and then they went up and made it 3-1. We had more in us, in the first half too, but Leverkusen were so clinical.  In the end we lost, so I’m not going to be happy about my goal.”

Florian Kohfeldt: “It was an open game until their third goal, but not a good one. We didn’t have any rhythm on the ball, but we didn’t give away so much. 2-1 came from another set piece. That wasn’t bad luck, just bad defending from us. We had some chances, for example e Leo before half time, and then some more where we couldn’t quite get the shot off. The difference today was that Leverkusen took their chances. The deserved to win.” 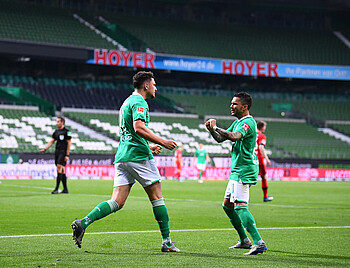 Niklas Moisander: "We trained a lot during the break and feel fit, but Leverkusen were better than us today. We need to analyse tonight's match well, because we've still got nine games to play."

Florian Kohfeldt: "One positive for me is that we created more chances than we were doing before the break. We said before today that tonight's game wasn't a final. It's not a knockout blow. We will stay positive and get this game out of our system. It's key that we maintain confidence in our attacking game."

On the atmosphere without fans:

Florian Kohfeldt: "I think there’s a very high chance of us finishing the season. Everyone acted in an exemplary manner. We are determined to finish the season. But we really missed the fans, this cannot become the norm. I think it’s very important that we are closely monitored and stick to the rules as far as continuing the season is concerned. Then football can say it has justified the faith that it was shown.”