The reaction to the Köln game

Werder’s 6-1 win and consequent qualification for the relegation playoffs has been dubbed by many as a miracle. “That’s an exaggeration for me,” said Florian Kohfeldt after the final whistle. One thing that is clear is that, in order to complete this miracle, Werder still have two challenges ahead of them: the relegation playoffs. If the Green-Whites succeed in this two-legged affair, they will retain their Bundesliga status after what has been a disastrous season for the club. “The intense pressure is still there; the only difference is that it’s now in our own hands. But we can’t afford to drop off at all,” said Kohfeldt. 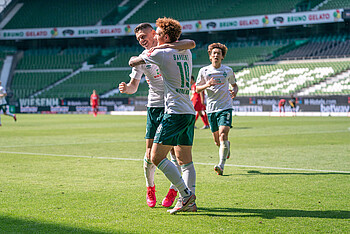 The team will have to turn their attentions to Thursday now (Photo: nordphoto).

Niclas Füllkrug: “It’s a really exciting day. The second half lasted forever, I was looking up at the clock every 15 seconds. We can be unbelievably grateful for the fact that we have two more games left now. We did our job today.”

Kevin Vogt: “The fact that we pulled off the first small miracle today is fantastic. I believe that, in the last third of the season, our upwards trend of performances has shown that we are more stable. But of course the time was running out. We were very confident today, we played on the front foot and kept finding gaps in their defence. We scored our goals at the perfect times. I don’t think they were expecting us to attack them like that. I’m very, very happy.”

Davy Klaassen: “I don’t think many people had been expecting that. But we believed in ourselves. We managed to do what the entire city and club believed we would. That paid off today. The fact that we scored three goals in quick succession helped of course. We’re happy, but not done yet.”

Niklas Moisander: “We knew that we had to win and score as many goals as possible. We managed to do that. We’re very happy. In the next two games we’ll have a ‘do or die’ attitude.”

Florian Kohfeldt: “The boys played well today. They were under immense pressure, just as they were in Freiburg or in Paderborn. We knew that if we didn’t win today, it was over. But it wasn’t just about our game here, we were relying on results elsewhere. We knew that it wasn’t in our own hands.”

Frank Baumann: “We played really, really well. Of course we kept a keen eye on what was happening in Berlin. We’re really, really happy that we at least finished the day in the playoff position. In football you can say a lot, without really explaining it. It’s difficult to say why it hasn’t worked for us at home recently. Of course a lot came together today. But you can also see that we played with our first-choice attack for the first time today. Yuya Osako, Niclas Füllkrug and Milot Rashica haven’t played together at all so far this season. That’s a lot of quality that we have been missing in a number of games. Today all three of them and the rest of the team put in a really good performance.”

On the game in Berlin: 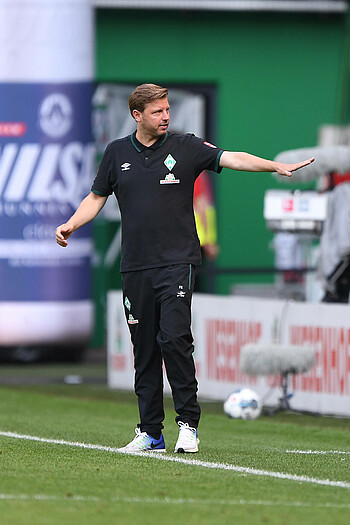 Florian Kohfeldt demands his side to remain focused ahead of the relegation playoffs (Photo: nordphoto).

Niclas Füllkrug: “We have Union Berlin to thank. It’s incredible that they put in such a great effort on the final day. Perhaps we should send them a crate of beer… We’re really, really happy today. It’s back in our own hands again.”

Kevin Vogt: “The situation was clear: we needed help. So we’ll have to do something for Union Berlin, perhaps I’ll even send them something myself. They helped us, but we also had to do our job today and we passed with flying colours.”

Florian Kohfeldt: “I have to say a big thank you to Union Berlin for their sporting mentality and for doing everything to win the game today. They did us a massive favour. At the same time, I also have great sympathy for Fortuna Düsseldorf, who played really well across the whole of the Rückrunde. I can imagine their pain.”

Frank Baumann: “We have to send a big thank you to Berlin. I think that the German footballing world knows that both Werder and Union Berlin are special clubs. “Iron Union” lived up to its name today. They have had a really special season and put the icing on the cake this afternoon.”

Marco Bode: “For the last half an hour I felt as if I was in Berlin. We have to send a huge thank you to Berlin. They played really well, particularly Tony Ujah, who scored the all-important opener. Just saying thank you isn’t enough.”

On the relegation playoff:

Florian Kohfeldt: “The immense pressure is still there. We now have two more games, in which we will give everything. In that respect, not much has changed. The small, but perhaps crucial difference, is that it’s now back in our own hands. But we can’t afford to drop off, at all! Because we now have two more cup finals ahead of us.”

Marco Bode: “The door is back open again; the chance is there.”

"Cool heads and a lot of emotion"

The Agony of Choice

01.07.2020 / preliminary report
Your web browser ist outdated.
The web browser you are using is no longer supported.
Please download one of these free and up to date browsers.
Why should I use an up to date web browser?