A Werder Bremen legend has said his goodbyes. Now that his Werder Bremen have beaten the drop, Claudio Pizarro has retired from football. The Peruvian not only won the 2009 DFB-Pokal with Werder Bremen, but with 109 goals for the club he is their all-time Bundesliga top scorer. A crowd favourite at the Osterdeich, a title winner with Bayern Munich, a global ambassador for the league and the only active player who began their career in the last century: Claudio Pizarro is one of the greats.

We look back on the really extraordinary moments of his time at Werder Bremen, and have included the best accompanying documents from his many years working with WERDER.TV and WERDER.de. Enjoy the read!

Moving from Alianza Lima to north Germany in 1999, it didn’t take Pizarro long to adapt. Along with Ailton, Pizarro became part of a prolific strike partnership just around the turn of the millennium. The 7-2 win in Wolfsburg in September 1999 was the birth of “Pizza-Toni”. Pizarro scored a perfect hat-trick, his first of five in the league. He scored in the Bundesliga for the first time a week earlier.

A great career began. ‚Piza‘ transferred to Bremen from other clubs a total of five times, at least three of which were to rapturous applause from Werder fans. The craziest transfer story came in September 2015 . With the story first breaking at Munich Airport, news of his return spread like wildfire. Hundreds of fans waited for Pizarro to spot Pizarro in his legendary purple jumper at Bremen airport for the #pizarrowatch. The rest went down in Werder history.

Bode: "Claudio is the better goalscorer" 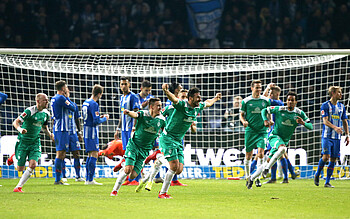 The list of his records since that time seems endless. From 23rd October 2010 to 9th March 2019, Pizarro was the most prolific foreign goalscorer in the Bundesliga. On 5th February 2016 he became the first foreigner to play 400 games in the Bundesliga, and a year and a half later was the first to reach 450. He played 490 in total. The striker scored in Germany’s top division an amazing 21 calendar years in a row.

In 2016, he replaced the current President of the Supervisory Board, Marco Bode, as Bremen’s all-time top scorer. In the end, he played 250 Bundesliga games for Werder Bremen and scored 109 goals in the league. The last of those goals was special in of itself, as with his free-kick goal against Hertha Berlin in February 2019, he became the oldest goalscorer in league history, aged 40 years and 136 days.

Pizarro: "The love of the fans goes directly into my heart" 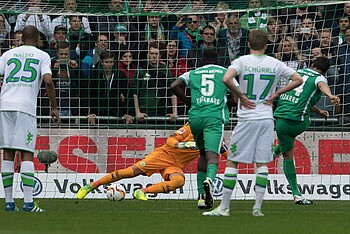 In 2019 Pizarro recieved an honorary award from the German Football League (DFL). “He is a footballer who is good for every team, for every club and for the Bundesliga as a whole – and not just in a sporting sense,” said Thomas Schaaf, who brought Pizarro to the club in 1999 when he was Werder head coach. A year earlier, Pizarro was awarded the Bambi Award, which was slightly unusual for a Bundesliga footballer to receive. But Pizarro was no longer an ordinary Bundesliga football. “I felt a bit like I was an actor,“ Pizarro said with a smile afterwards.

Pizarro’s final contract renewal for the club is simply unforgettable. At the almost biblical age for a player of 40, the striker announced his contract extension in May 2019 immediately before Werder Bremen kicked off against RB Leipzig. But that wasn’t all. The Werder veteran scored the winner to make it 2-1, and sent the Werder Bremen fans into ecstasy. “Scoring a goal and announcing my extension, that was really great! The love of the fans goes straight into my heart and gives me strength.”

Two hearts beat in the chest of the South American, something he always stressed. He felt at home in both Munich and Bremen, similar to his 21-year professional career split between Germany and Peru. Pizarro also became a German citizen and the face of the naturalisation campaign. A proper rascal, who always had fun in his media interviews.

“Piza” will say his goodbyes in a dignified environment, on the big stage at the wohninvest WESERSTADION, with all of those who were always so important to him in his impressive career: the fans. Given the current situation, it’s not yet certain when this will be possible. Until then, there will be a lot of time to reminisce about the wonderful memories of Claudio Pizarro’s career, for example in the “Family album,” (here on YouTube).

Everyone at SV Werder Bremen wishes to say:

Schönfelder faces spell on the sidelines

"Full of pride and gratitude"

Clemens Fritz takes over a newly-created role as ...

02.08.2020 / First Team
Your web browser ist outdated.
The web browser you are using is no longer supported.
Please download one of these free and up to date browsers.
Why should I use an up to date web browser?