A crucial game against Eintracht Frankfurt is next on the agenda for Werder; something Maxi Eggestein has already experienced before. It was all or nothing back in May 2016 when he lined up as a 19-year-old to help his side secure their Bundesliga status on the final day. Almost four years later Eggestein finds himself in another relegation battle, but the midfielder doesn’t want to draw too many similarities between the two situations. “It was completely different back then. It was the final game of the season, almost like a cup final. We still have eleven games left,” explained the 23-year-old in the mixed zone on Tuesday afternoon.

Nevertheless, Eggestein still has fond memories of that day. For a long time he had failed to establish himself in head coach Viktor Skripnik’s plans, however Fin Bartels was suspended for the final game of the season after accumulating too many yellow cards. “It was very surprising for me at the time, especially because I wasn’t playing in my position, but out on the left wing,” Eggestein looks back. With relegation on the line, it was a hugely important day.

Similar to today, albeit not quite the same. Werder still have ten important games ahead of them before their fate is decided. However, despite the remaining games, head coach Florian Kohfeldt made it clear how important the coming weeks are, “We have some really important weeks ahead of us now, with games against Eintracht Frankfurt and Hertha, in which we need to pick up points in order to have a realistic chance of staying in the division,” Kohfeldt said after the defeat against Dortmund. 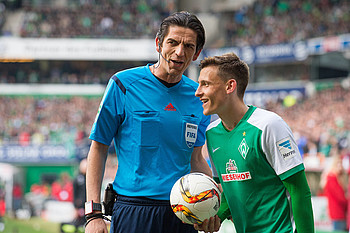 The former U21 national team player denied feeling any additional pressure, “If you’re not aware of how serious the situation is yet, then it’s already too late. We know that we need to pick up points.” Just as how the manner in which you win games is no longer important, individual’s needs are equally swept to the background. What’s much more important is, according to Eggestein, to bring in your own personal experiences from similar situations and to not let yourself be overwhelmed by pressure. “I’ve been through this a number of times now. Of course there’s pressure, you need to be aware of the situation you’re in but you can’t let it affect you. Otherwise you won’t be able to play freely,” said Eggestein.

At the same time, he clarified how Werder will attempt to win points against Frankfurt and Hertha. The team have focused on their offensive play and have altered how they defend set pieces, which have so often caused Werder problems in the past. The Green Whites have also been too weak in attacking corners and set pieces in recent weeks, which can an effective weapon for teams fighting in a relegation battle. Maximilian Eggestein knows this as well as anyone, after Papy Djilobodji’s winner against Eintracht Frankfurt back in 2016, resulting from a free kick.

“A comeback isn’t far away”

The return of Bundesliga football!