“Valuable exchange of ideas” with Pacific and Whitecaps

Werder eSPORTS athletes Michael “MegaBit” Bittner and Mohammed “MoAuba” Harkous had the honour of being invited to Electronic Arts’ headquarters in Vancouver. The pair teamed up with some of the game’s developers to test out FUT features on the new FIFA 20 title as EA look to iron out any final bugs. Werder’s Virtual Bundesliga champions were also joined by fellow eSports athletes Nawid “GoalMachine” Zoorzai and Ivan “DrNightWatch” Churov, while it was Harkous’ final outing as an official member of the Werder eSPORTS team.

After the three days of testing, the Green-Whites’ stay in Canada was extended as they joined up with a Werder delegation to visit MLS club Vancouver Whitecaps in order to exchange ideas on eSports. The Bremen duo also played against the Whitecaps’ eMLS pro Erfan “Skill Shack” Hosseini at the newly opened Gaming Stadium in Vancouver. Hosseini also took the Werder group on a tour of his hometown and the club’s stadium. 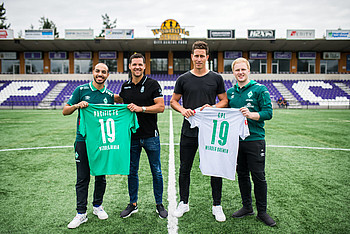 The trip continued on Friday with a helicopter ride to Victoria on Vancouver Island, where the Green-Whites were welcomed by newly-founded Pacific FC co-owners Rob Friend and Josh Simpson. After a tour of the city, the two former Bundesliga players and Danish coach Michael Silberbauer showed the Bremen delegation around the club grounds and talked about the Canadian Premier League, which was only founded in April.

“It was my first time in Canada, and it was a huge honour to play a small part in FIFA 20’s finished product,” said Bittner. “The meet-ups with the two clubs were also very interesting. I've learnt a lot about the Canadian Premier League and was able to share some insight into the world of eSports too.” After a look around the Pacific FC fan shop amid plenty of media interest, “MegaBit” and “MoAuba” then took on the club’s players, who even saw the gamers come out on top in a crossbar challenge.

“It was a very valuable exchange of ideas for all sides. We were made to feel very welcome and were given some very intriguing insight to the world of eMLS and of the two clubs, while we could also share Werder Bremen and the Bundesliga’s own goals surrounding eSports,” said Dominik Kupilas, head of Werder eSPORTS, who was part of the club’s four-man delegation in Canada.

29.05.2020 / First Team
Your web browser ist outdated.
The web browser you are using is no longer supported.
Please download one of these free and up to date browsers.
Why should I use an up to date web browser?