UNDERDOGS IN THE FIRST TOUGH TEST

Pre-match report on the Bundesliga opener against VFL Wolfsburg

On Saturday, the time will have finally come for Werder Bremen to return to the top flight when they take on VFL Wolfsburg at 15:30 CEST. Head coach Ole Werner is aware of the challenge the Wolves pose, but is convinced by the quality of his squad: “We want to show our ability. We are well-prepared and have worked on fixing our weaknesses. We want to play our style of football and show that we fit in the Bundesliga,” explained Werner at his press conference on Thursday.

Squad update: After the cup game against Energie Cottbus, Werner can, once again, rely upon a few returning players. Benjamin Goller has been in training all week following his ankle injury. Further candidates to feature in the squad are Abed Nankishi and Niklas Stark, who were absent on Monday through illness. Manuel Mbom remains in rehab after tearing his Achilles tendon and Eren Dinkci will also be unavailable due to persistent muscular problems. This is the case for Dikeni Salifou as well, who must rest due to a muscle injury in his adductor area. Youngster Fabio Chiarodia won’t feature in the squad as he has been called up to represent Italy u-19 in a friendly. Romano Schmid was another added to the inactive list today in light of his positive COVID-19 test.

The head coach on our opponents: “We know about our opponent’s quality and strengths, but will, of course, try to establish our quality within the game. In terms of individual quality and squad depth, Wolfsburg are definitely capable of performing at a much higher level than they did last year. That is clear from the pre-season that Wolfsburg had. In this respect, we are definitely the underdogs in this first game of the season, particularly being the away team. The team also has exceptional quality for the Bundesliga. When you look at their individual players and the depth to their squad, it is outstanding for this level. Moreover, they show such determination when pressing. They chase hard, are aggressive and have a clear identity.”

A tight record with goals guaranteed 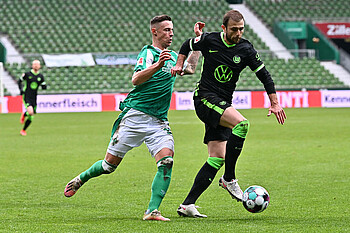 The last match: The two sides last met in March 2021 at the wohninvest WESERSTADION, when Wolfsburg ran away 2-1 winners. Josh Sargent scored an own goal to give the guests the lead, before Wout Wegshorst extended the Wolves’ advantage in the 42nd minute. Kevin Möhwald pulled a goal back for Werder just three minutes later, but the score remained the same. Wolfsburg were also victorious earlier in the season, winning an eight goal thriller 5-3.

Bundesliga stalwarts: The 2022/23 season will be the 60th edition of the Bundesliga. Werder Bremen have so far embarked on 58 Bundesliga campaigns, which is the joint-highest of any side. Only Bayern Munich can boast as many seasons in Germany’s elite competition.

A tight head-to-head record: The sides have met on 48 occasions in the league and the overall record is tight. SVW have been victorious 19 times, whereas VfL have got the better of the Green-Whites on 20 occasions. Ten of the matches have been draws.

High-scoring affairs: There have been an average of 3.56 goals per game between the two sides. Since Wolfsburg’s promotion to the Bundesliga in 1997, Werder have scored more goals against the Wolves than they have against any other opponent (85 goals). Werder have beaten Wolfsburg 19 times during this period, and have only celebrated more wins against one other side (Hertha BSC, 23 wins.)

Werder’s goal machines: Niclas Füllkrug (19 goals) and Marvin Ducksch (20 goals) both broke the 19 goal mark for Werder last season, and it was the first time that two Werder players have done so in the same campaign. Füllkrug was also the last player to score for Werder in the Bundesliga, when he netted against Gladbach on the final day of the 2020/21 season. The Foals, however, went on to win the game 4-2.

The match itself: From 14:30, you will be able to follow the game live via the betway Live-Ticker. The game will also be broadcast live on SKY. All WERDER.TV subscribers will be able to watch the entirety of the match immediately after the final whistle, as well as the highlights which will follow shortly after.